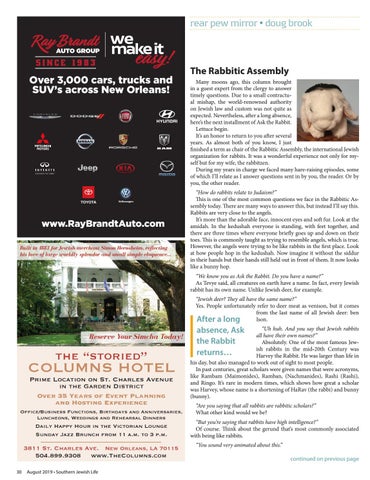 The Rabbitic Assembly Many moons ago, this column brought in a guest expert from the clergy to answer timely questions. Due to a small contractual mishap, the world-renowned authority on Jewish law and custom was not quite as expected. Nevertheless, after a long absence, here’s the next installment of Ask the Rabbit. Lettuce begin. It’s an honor to return to you after several years. As almost both of you know, I just finished a term as chair of the Rabbitic Assembly, the international Jewish organization for rabbits. It was a wonderful experience not only for myself but for my wife, the rabbitzen. During my years in charge we faced many hare-raising episodes, some of which I’ll relate as I answer questions sent in by you, the reader. Or by you, the other reader. “How do rabbits relate to Judaism?” This is one of the most common questions we face in the Rabbitic Assembly today. There are many ways to answer this, but instead I’ll say this. Rabbits are very close to the angels. It’s more than the adorable face, innocent eyes and soft fur. Look at the amidah. In the kedushah everyone is standing, with feet together, and there are three times where everyone briefly goes up and down on their toes. This is commonly taught as trying to resemble angels, which is true. However, the angels were trying to be like rabbits in the first place. Look at how people hop in the kedushah. Now imagine it without the siddur in their hands but their hands still held out in front of them. It now looks like a bunny hop. “We know you as Ask the Rabbit. Do you have a name?” As Tevye said, all creatures on earth have a name. In fact, every Jewish rabbit has its own name. Unlike Jewish deer, for example. “Jewish deer? They all have the same name?” Yes. People unfortunately refer to deer meat as venison, but it comes from the last name of all Jewish deer: ben Ison. After a long

“Uh huh. And you say that Jewish rabbits all have their own names?” Absolutely. One of the most famous Jewish rabbits in the mid-20th Century was Harvey the Rabbit. He was larger than life in his day, but also managed to work out of sight to most people. In past centuries, great scholars were given names that were acronyms, like Rambam (Maimonides), Ramban, (Nachmanides), Rashi (Rashi), and Ringo. It’s rare in modern times, which shows how great a scholar was Harvey, whose name is a shortening of HaRav (the rabbi) and bunny (bunny). “Are you saying that all rabbits are rabbitic scholars?” What other kind would we be? “But you’re saying that rabbits have high intelligence?” Of course. Think about the gerund that’s most commonly associated with being like rabbits. “You sound very animated about this.” continued on previous page