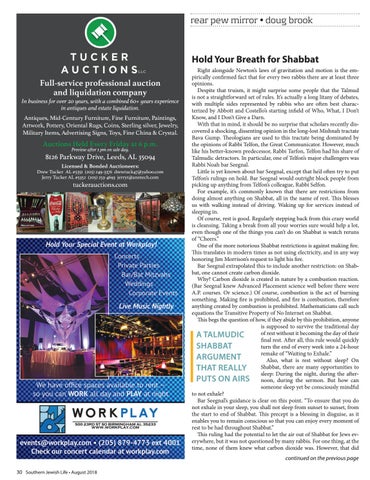 Auctions Held Every Friday at 6 p.m. Preview after 1 pm on sale day.

Right alongside Newton’s laws of gravitation and motion is the empirically confirmed fact that for every two rabbis there are at least three opinions. Despite that truism, it might surprise some people that the Talmud is not a straightforward set of rules. It’s actually a long litany of debates, with multiple sides represented by rabbis who are often best characterized by Abbott and Costello’s starting infield of Who, What, I Don’t Know, and I Don’t Give a Darn. With that in mind, it should be no surprise that scholars recently discovered a shocking, dissenting opinion in the long-lost Mishnah tractate Bava Gump. Theologians are used to this tractate being dominated by the opinions of Rabbi Telfon, the Great Communicator. However, much like his better-known predecessor, Rabbi Tarfon, Telfon had his share of Talmudic detractors. In particular, one of Telfon’s major challengers was Rabbi Noah bar Seegnal. Little is yet known about bar Seegnal, except that he’d often try to put Telfon’s rulings on hold. Bar Seegnal would outright block people from picking up anything from Telfon’s colleague, Rabbi Selfon. For example, it’s commonly known that there are restrictions from doing almost anything on Shabbat, all in the name of rest. This blesses us with walking instead of driving. Waking up for services instead of sleeping in. Of course, rest is good. Regularly stepping back from this crazy world is cleansing. Taking a break from all your worries sure would help a lot, even though one of the things you can’t do on Shabbat is watch reruns of “Cheers.” One of the more notorious Shabbat restrictions is against making fire. This translates in modern times as not using electricity, and in any way honoring Jim Morrison’s request to light his fire. Bar Seegnal extrapolated this to include another restriction: on Shabbat, one cannot create carbon dioxide. Why? Carbon dioxide is created in nature by a combustion reaction. (Bar Seegnal knew Advanced Placement science well before there were A.P. courses. Or science.) Of course, combustion is the act of burning something. Making fire is prohibited, and fire is combustion, therefore anything created by combustion is prohibited. Mathematicians call such equations the Transitive Property of No Internet on Shabbat. This begs the question of how, if they abide by this prohibition, anyone is supposed to survive the traditional day of rest without it becoming the day of their A TALMUDIC final rest. After all, this rule would quickly SHABBAT turn the end of every week into a 24-hour remake of “Waiting to Exhale.” ARGUMENT Also, what is rest without sleep? On Shabbat, there are many opportunities to THAT REALLY sleep: During the night, during the afterPUTS ON AIRS noon, during the sermon. But how can someone sleep yet be consciously mindful to not exhale? Bar Seegnal’s guidance is clear on this point. “To ensure that you do not exhale in your sleep, you shall not sleep from sunset to sunset, from the start to end of Shabbat. This precept is a blessing in disguise, as it enables you to remain conscious so that you can enjoy every moment of rest to be had throughout Shabbat.” This ruling had the potential to let the air out of Shabbat for Jews everywhere, but it was not questioned by many rabbis. For one thing, at the time, none of them knew what carbon dioxide was. However, that did continued on the previous page