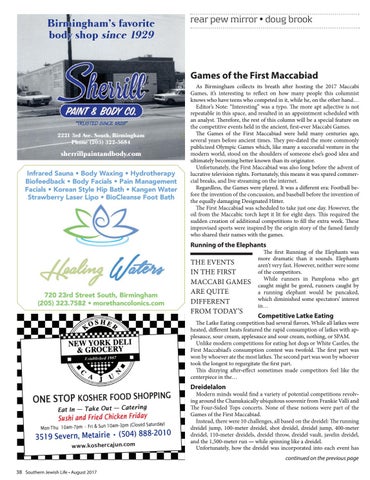 Games of the First Maccabiad As Birmingham collects its breath after hosting the 2017 Maccabi Games, it’s interesting to reflect on how many people this columnist knows who have teens who competed in it, while he, on the other hand… Editor’s Note: “Interesting” was a typo. The more apt adjective is not repeatable in this space, and resulted in an appointment scheduled with an analyst. Therefore, the rest of this column will be a special feature on the competitive events held in the ancient, first-ever Maccabi Games. The Games of the First Maccabiad were held many centuries ago, several years before ancient times. They pre-dated the more commonly publicized Olympic Games which, like many a successful venture in the modern world, stood on the shoulders of someone else’s good idea and ultimately becoming better known than its originator. Unfortunately, the First Maccabiad was also long before the advent of lucrative television rights. Fortunately, this means it was spared commercial breaks, and live streaming on the internet. Regardless, the Games were played. It was a different era: Football before the invention of the concussion, and baseball before the invention of the equally damaging Designated Hitter. The First Maccabiad was scheduled to take just one day. However, the oil from the Maccabic torch kept it lit for eight days. This required the sudden creation of additional competitions to fill the extra week. These improvised sports were inspired by the origin story of the famed family who shared their names with the games.

Running of the Elephants

The first Running of the Elephants was more dramatic than it sounds. Elephants aren’t very fast. However, neither were some of the competitors. While runners in Pamplona who get caught might be gored, runners caught by a running elephant would be pancaked, which diminished some spectators’ interest in…

The Latke Eating competition had several flavors. While all latkes were heated, different heats featured the rapid consumption of latkes with applesauce, sour cream, applesauce and sour cream, nothing, or SPAM. Unlike modern competitions for eating hot dogs or White Castles, the First Maccabiad’s consumption contest was twofold. The first part was won by whoever ate the most latkes. The second part was won by whoever took the longest to regurgitate the first part. This dizzying after-effect sometimes made competitors feel like the centerpiece in the…

ONE STOP KOSHER FOOD SHOPPING Eat In — Take Out — Catering

Modern minds would find a variety of potential competitions revolving around the Chanukaically ubiquitous souvenir from Frankie Valli and The Four-Sided Tops concerts. None of these notions were part of the Games of the First Maccabiad. Instead, there were 10 challenges, all based on the dreidel: The running dreidel jump, 100-meter dreidel, shot dreidel, dreidel jump, 400-meter dreidel, 110-meter dreidels, dreidel throw, dreidel vault, javelin dreidel, and the 1,500-meter run — while spinning like a dreidel. Unfortunately, how the dreidel was incorporated into each event has continued on the previous page