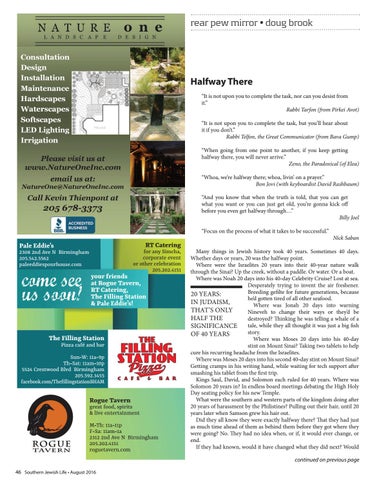 Please visit us at www.NatureOneInc.com email us at:

“Whoa, we’re halfway there; whoa, livin’ on a prayer.” Bon Jovi (with keyboardist David Rashbaum) “And you know that when the truth is told, that you can get what you want or you can just get old, you’re gonna kick off before you even get halfway through…” Billy Joel   “Focus on the process of what it takes to be successful.” Nick Saban

Many things in Jewish history took 40 years. Sometimes 40 days. Whether days or years, 20 was the halfway point. Where were the Israelites 20 years into their 40-year nature walk through the Sinai? Up the creek, without a paddle. Or water. Or a boat. Where was Noah 20 days into his 40-day Celebrity Cruise? Lost at sea. Desperately trying to invent the air freshener. Breeding gefilte for future generations, because 20 YEARS: he’d gotten tired of all other seafood. IN JUDAISM, Where was Jonah 20 days into warning THAT’S ONLY Nineveh to change their ways or they’d be HALF THE destroyed? Thinking he was telling a whale of a tale, while they all thought it was just a big fish SIGNIFICANCE story. OF 40 YEARS Where was Moses 20 days into his 40-day stint on Mount Sinai? Taking two tablets to help cure his recurring headache from the Israelites. Where was Moses 20 days into his second 40-day stint on Mount Sinai? Getting cramps in his writing hand, while waiting for tech support after smashing his tablet from the first trip. Kings Saul, David, and Solomon each ruled for 40 years. Where was Solomon 20 years in? In endless board meetings debating the High Holy Day seating policy for his new Temple. What were the southern and western parts of the kingdom doing after 20 years of harassment by the Philistines? Pulling out their hair, until 20 years later when Samson grew his hair out. Did they all know they were exactly halfway there? That they had just as much time ahead of them as behind them before they got where they were going? No. They had no idea when, or if, it would ever change, or end. If they had known, would it have changed what they did next? Would continued on previous page