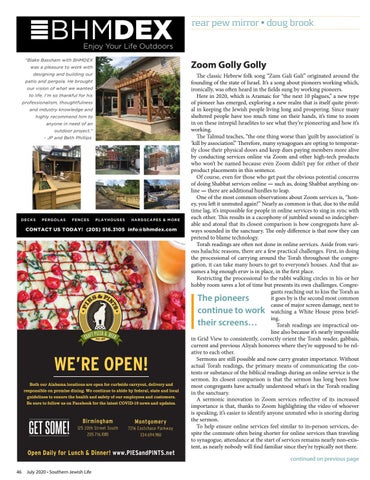 WE’RE OPEN! Both our Alabama locations are open for curbside carryout, delivery and responsible on premise dining. We continue to abide by federal, state and local guidelines to ensure the health and safety of our employees and customers. Be sure to follow us on Facebook for the latest COVID-19 news and updates.

The classic Hebrew folk song “Zum Gali Gali” originated around the founding of the state of Israel. It’s a song about pioneers working which, ironically, was often heard in the fields sung by working pioneers. Here in 2020, which is Aramaic for “the next 10 plagues,” a new type of pioneer has emerged, exploring a new realm that is itself quite pivotal in keeping the Jewish people living long and prospering. Since many sheltered people have too much time on their hands, it’s time to zoom in on these intrepid Israelites to see what they’re pioneering and how it’s working. The Talmud teaches, “the one thing worse than ‘guilt by association’ is ‘kill by association’.” Therefore, many synagogues are opting to temporarily close their physical doors and keep dues paying members more alive by conducting services online via Zoom and other high-tech products who won’t be named because even Zoom didn’t pay for either of their product placements in this sentence. Of course, even for those who get past the obvious potential concerns of doing Shabbat services online — such as, doing Shabbat anything online — there are additional hurdles to leap. One of the most common observations about Zoom services is, “honey, you left it unmuted again!” Nearly as common is that, due to the mild time lag, it’s impossible for people in online services to sing in sync with each other. This results in a cacophony of jumbled sound so indecipherable and atonal that its closest comparison is how congregants have always sounded in the sanctuary. The only difference is that now they can pretend to blame technology. Torah readings are often not done in online services. Aside from various halachic reasons, there are a few practical challenges. First, in doing the processional of carrying around the Torah throughout the congregation, it can take many hours to get to everyone’s houses. And that assumes a big enough eruv is in place, in the first place. Restricting the processional to the rabbi walking circles in his or her hobby room saves a lot of time but presents its own challenges. Congregants reaching out to kiss the Torah as it goes by is the second most common The pioneers cause of major screen damage, next to continue to work watching a White House press briefing. their screens… Torah readings are impractical online also because it’s nearly impossible in Grid View to consistently, correctly orient the Torah reader, gabbais, current and previous Aliyah honorees where they’re supposed to be relative to each other. Sermons are still possible and now carry greater importance. Without actual Torah readings, the primary means of communicating the contents or substance of the biblical readings during an online service is the sermon. Its closest comparison is that the sermon has long been how most congregants have actually understood what’s in the Torah reading in the sanctuary. A sermonic innovation in Zoom services reflective of its increased importance is that, thanks to Zoom highlighting the video of whoever is speaking, it’s easier to identify anyone unmuted who is snoring during the sermon. To help ensure online services feel similar to in-person services, despite the commute often being shorter for online services than traveling to synagogue, attendance at the start of services remains nearly non-existent, as nearly nobody will find familiar since they’re typically not there. continued on previous page