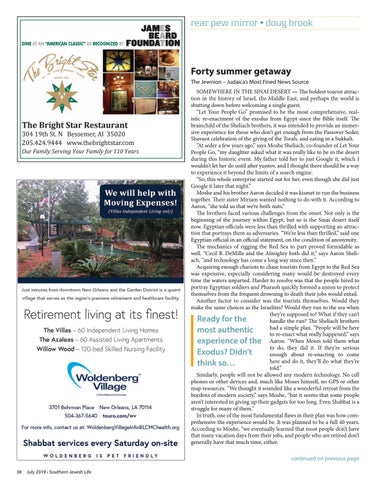 Our Family Serving Your Family for 110 Years

SOMEWHERE IN THE SINAI DESERT — The boldest tourist attraction in the history of Israel, the Middle East, and perhaps the world is shutting down before welcoming a single guest. “Let Your People Go” promised to be the most comprehensive, realistic re-enactment of the exodus from Egypt since the Bible itself. The brainchild of the Sheliach brothers, it was intended to provide an immersive experience for those who don’t get enough from the Passover Seder, Shavuot celebration of the giving of the Torah, and eating in a Sukkah. “At seder a few years ago,” says Moshe Sheliach, co-founder of Let Your People Go, “my daughter asked what it was really like to be in the desert during this historic event. My father told her to just Google it, which I wouldn’t let her do until after yuntov, and I thought there should be a way to experience it beyond the limits of a search engine. “So, this whole enterprise started out for her, even though she did just Google it later that night.” Moshe and his brother Aaron decided it was kismet to run the business together. Their sister Miriam wanted nothing to do with it. According to Aaron, “she told us that we’re both nuts.” The brothers faced various challenges from the onset. Not only is the beginning of the journey within Egypt, but so is the Sinai desert itself now. Egyptian officials were less than thrilled with supporting an attraction that portrays them as adversaries. “We’re less than thrilled,” said one Egyptian official in an official statement, on the condition of anonymity. The mechanics of rigging the Red Sea to part proved formidable as well. “Cecil B. DeMille and the Almighty both did it,” says Aaron Sheliach, “and technology has come a long way since then.” Acquiring enough chariots to chase tourists from Egypt to the Red Sea was expensive, especially considering many would be destroyed every time the waters unparted. Harder to resolve was that the people hired to portray Egyptian soldiers and Pharaoh quickly formed a union to protect themselves from the frequent drowning to death their jobs would entail. Another factor to consider was the tourists themselves. Would they make the same choices as the Israelites? Would they run to the sea when they’re supposed to? What if they can’t Ready for the handle the run? The Sheliach brothers had a simple plan. “People will be here most authentic to re-enact what really happened,” says experience of the Aaron. “When Moses told them what to do, they did it. If they’re serious Exodus? Didn’t enough about re-enacting to come here and do it, they’ll do what they’re think so… told.” Similarly, people will not be allowed any modern technology. No cell phones or other devices and, much like Moses himself, no GPS or other map resources. “We thought it sounded like a wonderful retreat from the burdens of modern society,” says Moshe, “but it seems that some people aren’t interested in giving up their gadgets for too long. Even Shabbat is a struggle for many of them.” In truth, one of the most fundamental flaws in their plan was how comprehensive the experience would be. It was planned to be a full 40 years. According to Moshe, “we eventually learned that most people don’t have that many vacation days from their jobs, and people who are retired don’t generally have that much time, either. continued on previous page