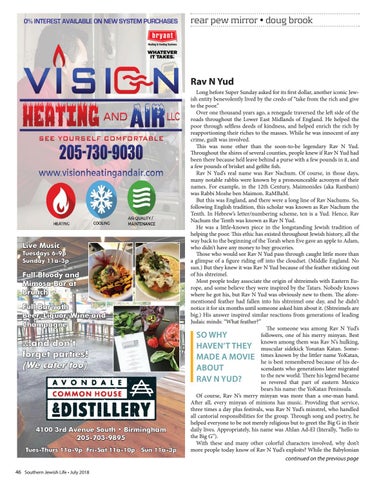 …and don’t forget parties! (We cater too)

Long before Super Sunday asked for its first dollar, another iconic Jewish entity benevolently lived by the credo of “take from the rich and give to the poor.” Over one thousand years ago, a renegade traversed the left side of the roads throughout the Lower East Midlands of England. He helped the poor through selfless deeds of kindness, and helped enrich the rich by reapportioning their riches to the masses. While he was innocent of any crime, guilt was involved. This was none other than the soon-to-be legendary Rav N Yud. Throughout the shires of several counties, people knew if Rav N Yud had been there because he’d leave behind a purse with a few pounds in it, and a few pounds of brisket and gefilte fish. Rav N Yud’s real name was Rav Nachum. Of course, in those days, many notable rabbis were known by a pronounceable acronym of their names. For example, in the 12th Century, Maimonides (aka Rambam) was Rabbi Moshe ben Maimon. RaMBaM. But this was England, and there were a long line of Rav Nachums. So, following English tradition, this scholar was known as Rav Nachum the Tenth. In Hebrew’s letter/numbering scheme, ten is a Yud. Hence, Rav Nachum the Tenth was known as Rav N Yud. He was a little-known piece in the longstanding Jewish tradition of helping the poor. This ethic has existed throughout Jewish history, all the way back to the beginning of the Torah when Eve gave an apple to Adam, who didn’t have any money to buy groceries. Those who would see Rav N Yud pass through caught little more than a glimpse of a figure riding off into the cloudset. (Middle England. No sun.) But they knew it was Rav N Yud because of the feather sticking out of his shtreimel. Most people today associate the origin of shtreimels with Eastern Europe, and some believe they were inspired by the Tatars. Nobody knows where he got his, but Rav N Yud was obviously new to them. The aforementioned feather had fallen into his shtreimel one day, and he didn’t notice it for six months until someone asked him about it. (Shtreimels are big.) His answer inspired similar reactions from generations of leading Judaic minds: “What feather?” The someone was among Rav N Yud’s followers, one of his merry minyan. Best SO WHY known among them was Rav N’s hulking, HAVEN’T THEY muscular sidekick Yonatan Katan. Someknown by the littler name YoKatan, MADE A MOVIE times he is best remembered because of his deABOUT scendants who generations later migrated to the new world. There his legend became RAV N YUD? so revered that part of eastern Mexico bears his name: the YoKatan Peninsula. Of course, Rav N’s merry minyan was more than a one-man band. After all, every minyan of minions has music. Providing that service, three times a day plus festivals, was Rav N Yud’s minstrel, who handled all cantorial responsibilities for the group. Through song and poetry, he helped everyone to be not merely religious but to greet the Big G in their daily lives. Appropriately, his name was Ahlan Ad-El (literally, “hello to the Big G”). With these and many other colorful characters involved, why don’t more people today know of Rav N Yud’s exploits? While the Babylonian continued on the previous page