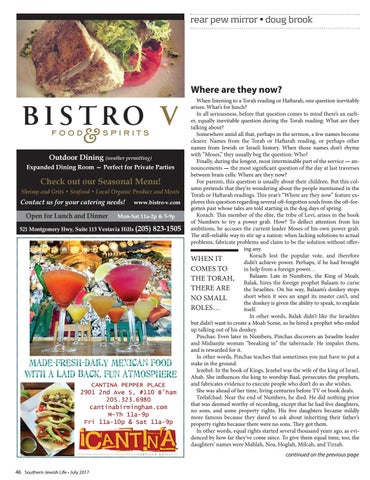 Where are they now?

When listening to a Torah reading or Haftarah, one question inevitably arises: What’s for lunch? In all seriousness, before that question comes to mind there’s an earlier, equally inevitable question during the Torah reading: What are they talking about? Somewhere amid all that, perhaps in the sermon, a few names become clearer. Names from the Torah or Haftarah reading, or perhaps other names from Jewish or Israeli history. When those names don’t rhyme with “Moses,” they usually beg the question: Who? Finally, during the longest, most interminable part of the service — announcements — the most significant question of the day at last traverses between brain cells: Where are they now? For parents, this question is usually about their children. But this column pretends that they’re wondering about the people mentioned in the Torah or Haftarah readings. This year’s “Where are they now” feature explores this question regarding several oft-forgotten souls from the oft-forgotten past whose tales are told starting in the dog days of spring. Korach: This member of the elite, the tribe of Levi, arises in the book of Numbers to try a power grab. How? To deflect attention from his ambitions, he accuses the current leader Moses of his own power grab. The still-reliable way to stir up a nation: when lacking solutions to actual problems, fabricate problems and claim to be the solution without offering any. Korach lost the popular vote, and therefore WHEN IT didn’t achieve power. Perhaps, if he had brought COMES TO in help from a foreign power… Balaam: Late in Numbers, the King of Moab, THE TORAH, Balak, hires the foreign prophet Balaam to curse THERE ARE the Israelites. On his way, Balaam’s donkey stops short when it sees an angel its master can’t, and NO SMALL the donkey is given the ability to speak, to explain ROLES… itself. In other words, Balak didn’t like the Israelites but didn’t want to create a Moab Scene, so he hired a prophet who ended up talking out of his donkey. Pinchas: Even later in Numbers, Pinchas discovers an Israelite leader and Midianite woman “breaking in” the tabernacle. He impales them, and is rewarded for it. In other words, Pinchas teaches that sometimes you just have to put a stake in the ground. Jezebel: In the book of Kings, Jezebel was the wife of the king of Israel, Ahab. She influences the king to worship Baal, persecutes the prophets, and fabricates evidence to execute people who don’t do as she wishes. She was ahead of her time, living centuries before TV or book deals. Tzelafchad: Near the end of Numbers, he died. He did nothing prior that was deemed worthy of recording, except that he had five daughters, no sons, and some property rights. His five daughters became mildly more famous because they dared to ask about inheriting their father’s property rights because there were no sons. They got them. In other words, equal rights started several thousand years ago, as evidenced by how far they’ve come since. To give them equal time, too, the daughters’ names were Mahlah, Noa, Hoglah, Milcah, and Tirzah. continued on the previous page