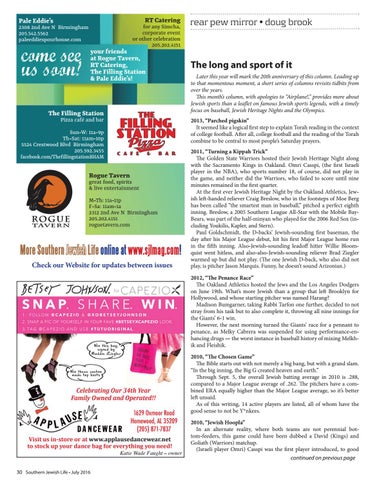 The long and sport of it Later this year will mark the 20th anniversary of this column. Leading up to that momentous moment, a short series of columns revisits tidbits from over the years. This month’s column, with apologies to “Airplane!,” provides more about Jewish sports than a leaflet on famous Jewish sports legends, with a timely focus on baseball, Jewish Heritage Nights and the Olympics. 2013, “Parched pigskin” It seemed like a logical first step to explain Torah reading in the context of college football. After all, college football and the reading of the Torah combine to be central to most people’s Saturday prayers. 2011, “Turning a Kippah Trick” The Golden State Warriors hosted their Jewish Heritage Night along with the Sacramento Kings in Oakland. Omri Casspi, (the first Israeli player in the NBA), who sports number 18, of course, did not play in the game, and neither did the Warriors, who failed to score until nine minutes remained in the first quarter. At the first ever Jewish Heritage Night by the Oakland Athletics, Jewish left-handed reliever Craig Breslow, who in the footsteps of Moe Berg has been called “the smartest man in baseball,” pitched a perfect eighth inning. Breslow, a 2005 Southern League All-Star with the Mobile BayBears, was part of the half-minyan who played for the 2006 Red Sox (including Youkilis, Kapler, and Stern). Paul Goldschmidt, the D-backs’ Jewish-sounding first baseman, the day after his Major League debut, hit his first Major League home run in the fifth inning. Also-Jewish-sounding leadoff hitter Willie Bloomquist went hitless, and also-also-Jewish-sounding reliever Brad Ziegler warmed up but did not play. (The one Jewish D-back, who also did not play, is pitcher Jason Marquis. Funny, he doesn’t sound Arizonian.)   2012, “The Penance Race” The Oakland Athletics hosted the Jews and the Los Angeles Dodgers on June 19th. What’s more Jewish than a group that left Brooklyn for Hollywood, and whose starting pitcher was named Harang? Madison Bumgarner, taking Rabbi Tarfon one further, decided to not stray from his task but to also complete it, throwing all nine innings for the Giants’ 6-1 win. However, the next morning turned the Giants’ race for a pennant to penance, as Melky Cabrera was suspended for using performance-enhancing drugs — the worst instance in baseball history of mixing Melkhik and Fleishik.   2010, “The Chosen Game” The Bible starts out with not merely a big bang, but with a grand slam. “In the big inning, the Big G created heaven and earth.” Through Sept. 5, the overall Jewish batting average in 2010 is .288, compared to a Major League average of .262. The pitchers have a combined ERA equally higher than the Major League average, so it’s better left unsaid. As of this writing, 14 active players are listed, all of whom have the good sense to not be Y*nkees.   2010, “Jewish Hoopla” In an alternate reality, where both teams are not perennial bottom-feeders, this game could have been dubbed a David (Kings) and Goliath (Warriors) matchup. (Israeli player Omri) Casspi was the first player introduced, to good continued on previous page