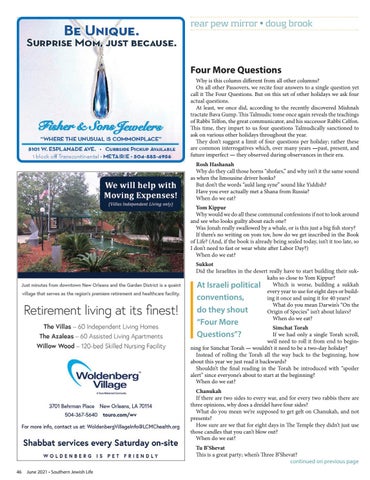 Four More Questions Why is this column different from all other columns? On all other Passovers, we recite four answers to a single question yet call it The Four Questions. But on this set of other holidays we ask four actual questions. At least, we once did, according to the recently discovered Mishnah tractate Bava Gump. This Talmudic tome once again reveals the teachings of Rabbi Telfon, the great communicator, and his successor Rabbi Celfon. This time, they impart to us four questions Talmudically sanctioned to ask on various other holidays throughout the year. They don’t suggest a limit of four questions per holiday; rather these are common interrogatives which, over many years —past, present, and future imperfect — they observed during observances in their era. Rosh Hashanah Why do they call those horns “shofars,” and why isn’t it the same sound as when the limousine driver honks? But don’t the words “auld lang syne” sound like Yiddish? Have you ever actually met a Shana from Russia? When do we eat? Yom Kippur Why would we do all these communal confessions if not to look around and see who looks guilty about each one? Was Jonah really swallowed by a whale, or is this just a big fish story? If there’s no writing on yom tov, how do we get inscribed in the Book of Life? (And, if the book is already being sealed today, isn’t it too late, so I don’t need to fast or wear white after Labor Day?) When do we eat? Sukkot Did the Israelites in the desert really have to start building their sukkahs so close to Yom Kippur? At Israeli political Which is worse, building a sukkah every year to use for eight days or building it once and using it for 40 years? conventions, What do you mean Darwin’s “On the do they shout Origin of Species” isn’t about lulavs? When do we eat?

Simchat Torah If we had only a single Torah scroll, we’d need to roll it from end to beginning for Simchat Torah — wouldn’t it need to be a two-day holiday? Instead of rolling the Torah all the way back to the beginning, how about this year we just read it backwards? Shouldn’t the final reading in the Torah be introduced with “spoiler alert” since everyone’s about to start at the beginning? When do we eat? Chanukah If there are two sides to every war, and for every two rabbis there are three opinions, why does a dreidel have four sides? What do you mean we’re supposed to get gelt on Chanukah, and not presents? How sure are we that for eight days in The Temple they didn’t just use those candles that you can’t blow out? When do we eat? Tu B’Shevat This is a great party; when’s Three B’Shevat? continued on previous page 46