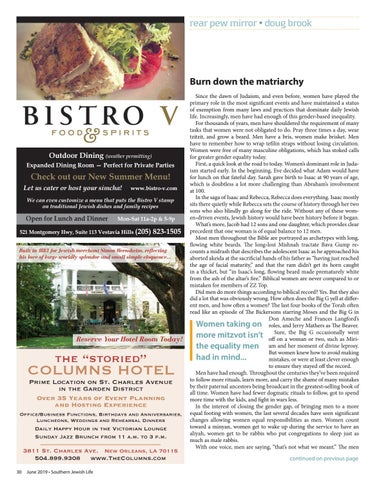 Burn down the matriarchy

Check out our New Summer Menu! Let us cater or host your simcha!

Since the dawn of Judaism, and even before, women have played the primary role in the most significant events and have maintained a status of exemption from many laws and practices that dominate daily Jewish life. Increasingly, men have had enough of this gender-based inequality. For thousands of years, men have shouldered the requirement of many tasks that women were not obligated to do. Pray three times a day, wear tzitzit, and grow a beard. Men have a bris, women make brisket. Men have to remember how to wrap tefilin straps without losing circulation. Women were free of many masculine obligations, which has stoked calls for greater gender equality today. First, a quick look at the road to today. Women’s dominant role in Judaism started early. In the beginning, Eve decided what Adam would have for lunch on that fateful day. Sarah gave birth to Isaac at 90 years of age, which is doubtless a lot more challenging than Abraham’s involvement at 100. In the saga of Isaac and Rebecca, Rebecca does everything. Isaac mostly sits there quietly while Rebecca sets the course of history through her two sons who also blindly go along for the ride. Without any of these women-driven events, Jewish history would have been history before it began. What’s more, Jacob had 12 sons and one daughter, which provides clear precedent that one woman is of equal balance to 12 men. Most men throughout the Bible are portrayed as archetypes with long, flowing white beards. The long-lost Mishnah tractate Bava Gump recounts a midrash that describes the adolescent Isaac as he approached his aborted akeida at the sacrificial hands of his father as “having just reached the age of facial maturity,” and that the ram didn’t get its horn caught in a thicket, but “in Isaac’s long, flowing beard made prematurely white from the ash of the altar’s fire.” Biblical women are never compared to or mistaken for members of ZZ Top. Did men do more things according to biblical record? Yes. But they also did a lot that was obviously wrong. How often does the Big G yell at different men, and how often a women? The last four books of the Torah often read like an episode of The Bickersons starring Moses and the Big G in Don Ameche and Frances Langford’s Women taking on roles, and Jerry Mathers as The Beaver. the Big G occasionally went more mitzvot isn’t offSure, on a woman or two, such as Mirithe equality men am and her moment of divine leprosy. But women knew how to avoid making had in mind... mistakes, or were at least clever enough to ensure they stayed off the record. Men have had enough. Throughout the centuries they’ve been required to follow more rituals, learn more, and carry the shame of many mistakes by their paternal ancestors being broadcast in the greatest-selling book of all time. Women have had fewer dogmatic rituals to follow, got to spend more time with the kids, and fight in wars less. In the interest of closing the gender gap, of bringing men to a more equal footing with women, the last several decades have seen significant changes allowing women equal responsibilities as men. Women count toward a minyan, women get to wake up during the service to have an aliyah, women get to be rabbis who put congregations to sleep just as much as male rabbis. With one voice, men are saying, “that’s not what we meant.” The men continued on previous page