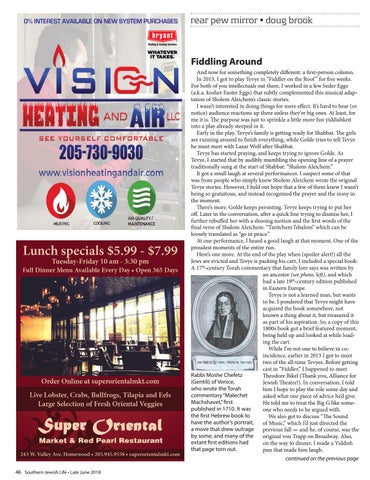 Fiddling Around And now for something completely different: a first-person column. In 2013, I got to play Tevye in “Fiddler on the Roof ” for five weeks. For both of you intellectuals out there, I worked in a few Seder Eggs (a.k.a. kosher Easter Eggs) that subtly complemented this musical adaptation of Sholem Aleichem’s classic stories. I wasn’t interested in doing things for mere effect. It’s hard to hear (or notice) audience reactions up there unless they’re big ones. At least, for me it is. The purpose was just to sprinkle a little more fun yiddishkeit into a play already steeped in it. Early in the play, Tevye’s family is getting ready for Shabbat. The girls are running around to finish everything, while Golde tries to tell Tevye he must meet with Lazar Wolf after Shabbat. Tevye has started praying, and keeps trying to ignore Golde. As Tevye, I started that by audibly mumbling the opening line of a prayer traditionally sung at the start of Shabbat: “Shalom Aleichem.” It got a small laugh at several performances. I suspect some of that was from people who simply knew Sholem Aleichem wrote the original Tevye stories. However, I held out hope that a few of them knew I wasn’t being so gratuitous, and instead recognized the prayer and the irony in the moment. There’s more. Golde keeps persisting. Tevye keeps trying to put her off. Later in the conversation, after a quick line trying to dismiss her, I further rebuffed her with a shooing motion and the first words of the final verse of Shalom Aleichem: “Tzeitchem l’shalom” which can be loosely translated as “go in peace.” At one performance, I heard a good laugh at that moment. One of the proudest moments of the entire run. Here’s one more. At the end of the play when (spoiler alert!) all the Jews are evicted and Tevye is packing his cart, I included a special book: A 17th-century Torah commentary that family lore says was written by an ancestor (see photo, left), and which had a late 19th-century edition published in Eastern Europe. Tevye is not a learned man, but wants to be. I pondered that Tevye might have acquired the book somewhere, not known a thing about it, but treasured it as part of his aspiration. So, a copy of this 1800s book got a brief featured moment, being held up and looked at while loading the cart. While I’m not one to believe in coincidence, earlier in 2013 I got to meet two of the all-time Tevyes. Before getting cast in “Fiddler,” I happened to meet Rabbi Moshe Chefetz Theodore Bikel (Thank you, Alliance for (Gentili) of Venice, Jewish Theatre!). In conversation, I told who wrote the Torah him I hope to play the role some day and commentary “Malechet asked what one piece of advice he’d give. Machshavet,” first He told me to treat the Big G like somepublished in 1710. It was one who needs to be argued with. the first Hebrew book to We also got to discuss “The Sound have the author’s portrait, of Music,” which I’d just directed the a move that drew outrage previous fall — and he, of course, was the by some, and many of the original von Trapp on Broadway. Also, extant first editions had on the way to dinner, I made a Yiddish that page torn out. pun that made him laugh. continued on the previous page 46 Southern Jewish Life • Late June 2018