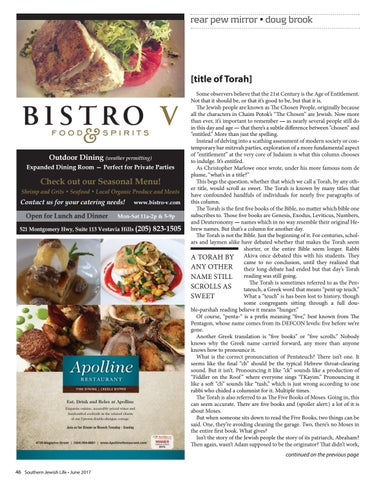 Some observers believe that the 21st Century is the Age of Entitlement. Not that it should be, or that it’s good to be, but that it is. The Jewish people are known as The Chosen People, originally because all the characters in Chaim Potok’s “The Chosen” are Jewish. Now more than ever, it’s important to remember — as nearly several people still do in this day and age — that there’s a subtle difference between “chosen” and “entitled.” More than just the spelling. Instead of delving into a scathing assessment of modern society or contemporary bar mitzvah parties, exploration of a more fundamental aspect of “entitlement” at the very core of Judaism is what this column chooses to indulge. It’s entitled. As Christopher Marlowe once wrote, under his more famous nom de plume, “what’s in a title?” This begs the question, whether that which we call a Torah, by any other title, would scroll as sweet. The Torah is known by many titles that have confounded handfuls of individuals for nearly five paragraphs of this column. The Torah is the first five books of the Bible, no matter which bible one subscribes to. Those five books are Genesis, Exodus, Leviticus, Numbers, and Deuteronomy — names which in no way resemble their original Hebrew names. But that’s a column for another day. The Torah is not the Bible. Just the beginning of it. For centuries, scholars and laymen alike have debated whether that makes the Torah seem shorter, or the entire Bible seem longer. Rabbi A TORAH BY Akiva once debated this with his students. They came to no conclusion, until they realized that ANY OTHER their long debate had ended but that day’s Torah reading was still going. NAME STILL The Torah is sometimes referred to as the PenSCROLLS AS tateuch, a Greek word that means “pent up teuch.” What a “teuch” is has been lost to history, though SWEET some congregants sitting through a full double-parshah reading believe it means “hunger.” Of course, “penta-“ is a prefix meaning “five,” best known from The Pentagon, whose name comes from its DEFCON levels: five before we’re gone. Another Greek translation is “five books” or “five scrolls.” Nobody knows why the Greek name carried forward, any more than anyone knows how to pronounce it. What is the correct pronunciation of Pentateuch? There isn’t one. It seems like the final “ch” should be the typical Hebrew throat-clearing sound. But it isn’t. Pronouncing it like “ck” sounds like a production of “Fiddler on the Roof ” where everyone sings “l’Kayim.” Pronouncing it like a soft “ch” sounds like “tush,” which is just wrong according to one rabbi who chided a columnist for it. Multiple times. The Torah is also referred to as The Five Books of Moses. Going in, this can seem accurate. There are five books and (spoiler alert:) a lot of it is about Moses. But when someone sits down to read the Five Books, two things can be said. One, they’re avoiding cleaning the garage. Two, there’s no Moses in the entire first book. What gives? Isn’t the story of the Jewish people the story of its patriarch, Abraham? Then again, wasn’t Adam supposed to be the originator? That didn’t work, continued on the previous page