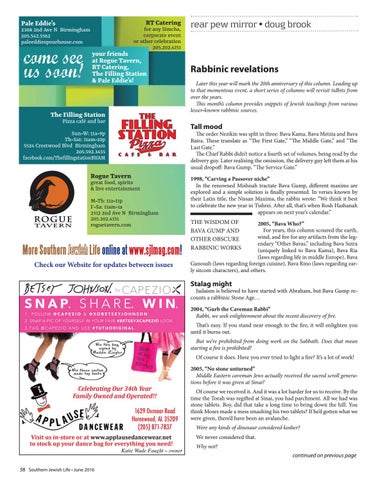 Rabbinic revelations Later this year will mark the 20th anniversary of this column. Leading up to that momentous event, a short series of columns will revisit tidbits from over the years. This month’s column provides snippets of Jewish teachings from various lesser-known rabbinic sources.

The order Nezikin was split in three: Bava Kama, Bava Metzia and Bava Batra. These translate as “The First Gate,” “The Middle Gate,” and “The Last Gate.” The Chief Rabbi didn’t notice a fourth set of volumes, being read by the delivery guy. Later realizing the omission, the delivery guy left them at his usual dropoff: Bava Gump, “The Service Gate.”

1998, “Carving a Passover niche” In the renowned Mishnah tractate Bava Gump, different maxims are explored and a simple solution is finally presented. In verses known by their Latin title, the Nissan Maxima, the rabbis wrote: “We think it best to celebrate the new year in Tishrei. After all, that’s when Rosh Hashanah appears on next year’s calendar.”

THE WISDOM OF BAVA GUMP AND OTHER OBSCURE RABBINIC WORKS

2005, “Bava Who?” For years, this column scoured the earth, wind, and fire for any artifacts from the legendary “Other Bavas,” including Bava Sutra (uniquely linked to Bava Kama), Bava Ria (laws regarding life in middle Europe), Bava Ganoush (laws regarding foreign cuisine), Bava Rino (laws regarding early sitcom characters), and others.

Judaism is believed to have started with Abraham, but Bava Gump recounts a rabbinic Stone Age… 2004, “Gurb the Caveman Rabbi” Rabbi, we seek enlightenment about the recent discovery of fire. That’s easy. If you stand near enough to the fire, it will enlighten you until it burns out. But we’re prohibited from doing work on the Sabbath. Does that mean starting a fire is prohibited? Of course it does. Have you ever tried to light a fire? It’s a lot of work!

2005, “No stone unturned” Middle Eastern caveman Jews actually received the sacred scroll generations before it was given at Sinai? Of course we received it. And it was a lot harder for us to receive. By the time the Torah was regifted at Sinai, you had parchment. All we had was stone tablets. Boy, did that take a long time to bring down the hill. You think Moses made a mess smashing his two tablets? If he’d gotten what we were given, there’d have been an avalanche. Were any kinds of dinosaur considered kosher? We never considered that. Why not? continued on previous page