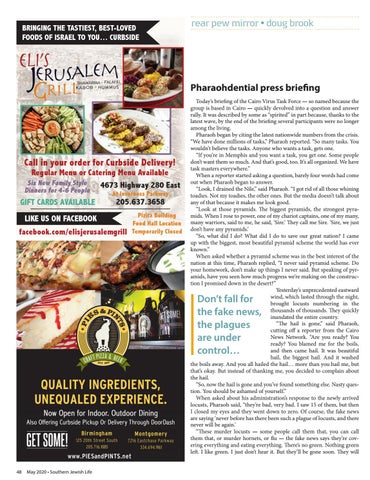 BRINGING THE TASTIEST, BEST-LOVED FOODS OF ISRAEL TO YOU… CURBSIDE

Call in your order for Curbside Delivery!

Today’s briefing of the Cairo Virus Task Force — so named because the group is based in Cairo — quickly devolved into a question and answer rally. It was described by some as “spirited” in part because, thanks to the latest wave, by the end of the briefing several participants were no longer among the living. Pharaoh began by citing the latest nationwide numbers from the crisis. “We have done millions of tasks,” Pharaoh reported. “So many tasks. You wouldn’t believe the tasks. Anyone who wants a task, gets one. “If you’re in Memphis and you want a task, you get one. Some people don’t want them so much. And that’s good, too. It’s all organized. We have task masters everywhere.” When a reporter started asking a question, barely four words had come out when Pharaoh began to answer. “Look, I drained the Nile,” said Pharaoh. “I got rid of all those whining toadies. Not my toadies, the other ones. But the media doesn’t talk about any of that because it makes me look good. “Look at those pyramids. The biggest pyramids, the strongest pyramids. When I rose to power, one of my chariot captains, one of my many, many warriors, said to me, he said, ‘Sire.’ They call me Sire. ‘Sire, we just don’t have any pyramids.’ “So, what did I do? What did I do to save our great nation? I came up with the biggest, most beautiful pyramid scheme the world has ever known.” When asked whether a pyramid scheme was in the best interest of the nation at this time, Pharaoh replied, “I never said pyramid scheme. Do your homework, don’t make up things I never said. But speaking of pyramids, have you seen how much progress we’re making on the construction I promised down in the desert?” Yesterday’s unprecedented eastward wind, which lasted through the night, brought locusts numbering in the thousands of thousands. They quickly inundated the entire country. “The hail is gone,” said Pharaoh, cutting off a reporter from the Cairo News Network. “Are you ready? You ready? You blamed me for the boils, and then came hail. It was beautiful hail, the biggest hail. And it washed the boils away. And you all hailed the hail… more than you hail me, but that’s okay. But instead of thanking me, you decided to complain about the hail. “So, now the hail is gone and you’ve found something else. Nasty question. You should be ashamed of yourself.” When asked about his administration’s response to the newly arrived locusts, Pharaoh said, “they’re bad, very bad. I saw 15 of them, but then I closed my eyes and they went down to zero. Of course, the fake news are saying ‘never before has there been such a plague of locusts, and there never will be again.’ “These murder locusts — some people call them that, you can call them that, or murder hornets, or flu — the fake news says they’re covering everything and eating everything. There’s no green. Nothing green left. I like green. I just don’t hear it. But they’ll be gone soon. They will

Don’t fall for the fake news, the plagues are under control…

May 2020 issue of Southern Jewish Life, the Jewish news magazine for Alabama, Mississippi, Louisiana and NW Florida. The official publication of the Jewish community of Greater New Orleans.