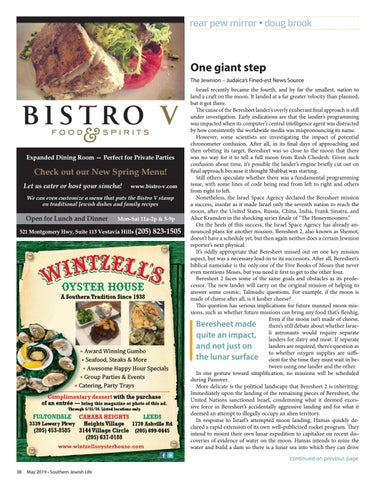 Check out our New Spring Menu! Let us cater or host your simcha!

Israel recently became the fourth, and by far the smallest, nation to land a craft on the moon. It landed at a far greater velocity than planned, but it got there. The cause of the Beresheet lander’s overly exuberant final approach is still under investigation. Early indications are that the lander’s programming was impacted when its computer’s central intelligence agent was distracted by how consistently the worldwide media was mispronouncing its name. However, some scientists are investigating the impact of potential chronometer confusion. After all, in its final days of approaching and then orbiting its target, Beresheet was so close to the moon that there was no way for it to tell a full moon from Rosh Chodesh. Given such confusion about time, it’s possible the lander’s engine briefly cut out on final approach because it thought Shabbat was starting. Still others speculate whether there was a fundamental programming issue, with some lines of code being read from left to right and others from right to left. Nonetheless, the Israel Space Agency declared the Beresheet mission a success, insofar as it made Israel only the seventh nation to reach the moon, after the United States, Russia, China, India, Frank Sinatra, and Alice Kramden in the shocking series finale of “The Honeymooners.” On the heels of this success, the Israel Space Agency has already announced plans for another mission. Beresheet 2, also known as Shemot, doesn’t have a schedule yet, but then again neither does a certain Jewnion reporter’s next physical. It’s oddly appropriate that Beresheet missed out on one key mission aspect, but was a necessary lead-in to its successors. After all, Beresheet’s biblical namesake is the only one of the Five Books of Moses that never even mentions Moses, but you need it first to get to the other four. Beresheet 2 faces some of the same goals and obstacles as its predecessor. The new lander will carry on the original mission of helping to answer some cosmic, Talmudic questions. For example, if the moon is made of cheese after all, is it kosher cheese? This question has serious implications for future manned moon missions, such as whether future missions can bring any food that’s fleishig. Even if the moon isn’t made of cheese, Beresheet made there’s still debate about whether Israeastronauts would require separate quite an impact, lilanders for dairy and meat. If separate landers are required, there’s question as and not just on to whether oxygen supplies are suffithe lunar surface cient for the time they must wait in between using one lander and the other. In one gesture toward simplification, no missions will be scheduled during Passover. More delicate is the political landscape that Beresheet 2 is inheriting. Immediately upon the landing of the remaining pieces of Beresheet, the United Nations sanctioned Israel, condemning what it deemed excessive force in Beresheet’s accidentally aggressive landing and for what it deemed an attempt to illegally occupy an alien territory. In response to Israel’s attempted moon landing, Hamas quickly declared a rapid extension of its own well-publicized rocket program. They intend to mount their own lunar expedition to capitalize on recent discoveries of evidence of water on the moon. Hamas intends to mine the water and build a dam so there is a lunar sea into which they can drive continued on previous page