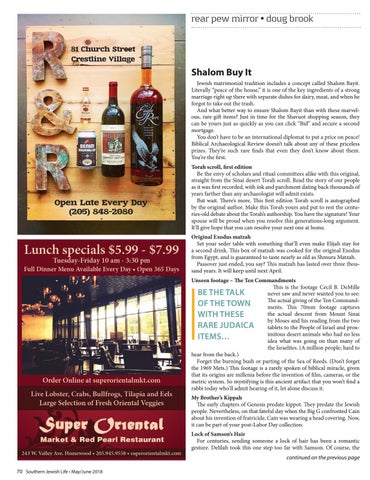 Shalom Buy It Jewish matrimonial tradition includes a concept called Shalom Bayit. Literally “peace of the house,” it is one of the key ingredients of a strong marriage right up there with separate dishes for dairy, meat, and when he forgot to take out the trash. And what better way to ensure Shalom Bayit than with these marvelous, rare gift items? Just in time for the Shavuot shopping season, they can be yours just as quickly as you can click “Bid” and secure a second mortgage. You don’t have to be an international diplomat to put a price on peace! Biblical Archaeological Review doesn’t talk about any of these priceless prizes. They’re such rare finds that even they don’t know about them. You’re the first.

Torah scroll, first edition Be the envy of scholars and ritual committees alike with this original, straight from the Sinai desert Torah scroll. Read the story of our people as it was first recorded, with ink and parchment dating back thousands of years farther than any archaeologist will admit exists. But wait. There’s more. This first edition Torah scroll is autographed by the original author. Make this Torah yours and put to rest the centuries-old debate about the Torah’s authorship. You have the signature! Your spouse will be proud when you resolve this generations-long argument. It’ll give hope that you can resolve your next one at home. Original Exodus matzah Set your seder table with something that’ll even make Elijah stay for a second drink. This box of matzah was cooked for the original Exodus from Egypt, and is guaranteed to taste nearly as old as Shmura Matzah. Passover just ended, you say? This matzah has lasted over three thousand years. It will keep until next April. Unseen footage – The Ten Commandments This is the footage Cecil B. DeMille BE THE TALK never saw and never wanted you to see: The actual giving of the Ten CommandOF THE TOWN ments. This 70mm footage captures the actual descent from Mount Sinai WITH THESE by Moses and his reading from the two RARE JUDAICA tablets to the People of Israel and proximitous desert animals who had no less ITEMS… idea what was going on than many of the Israelites. (A million people; hard to hear from the back.) Forget the burning bush or parting of the Sea of Reeds. (Don’t forget the 1969 Mets.) This footage is a rarely spoken of biblical miracle, given that its origins are millenia before the invention of film, cameras, or the metric system. So mystifying is this ancient artifact that you won’t find a rabbi today who’ll admit hearing of it, let alone discuss it. My Brother’s Kippah The early chapters of Genesis predate kippot. They predate the Jewish people. Nevertheless, on that fateful day when the Big G confronted Cain about his invention of fratricide, Cain was wearing a head covering. Now, it can be part of your post-Labor Day collection. Lock of Samson’s Hair For centuries, sending someone a lock of hair has been a romantic gesture. Delilah took this one step too far with Samson. Of course, the continued on the previous page