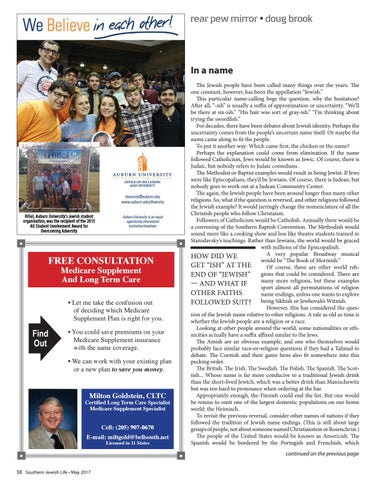 • Let me take the confusion out of deciding which Medicare Supplement Plan is right for you.

• You could save premiums on your Medicare Supplement insurance with the same coverage. • We can work with your existing plan or a new plan to save you money.

The Jewish people have been called many things over the years. The one constant, however, has been the appellation “Jewish.” This particular name-calling begs the question, why the hesitation? After all, “-ish” is usually a suffix of approximation or uncertainty. “We’ll be there at six-ish.” “His hair was sort of gray-ish.” “I’m thinking about trying the swordfish.” For decades, there have been debates about Jewish identity. Perhaps the uncertainty comes from the people’s uncertain name itself. Or maybe the name came along to fit the people. To put it another way: Which came first, the chicken or the name? Perhaps the explanation could come from elimination. If the name followed Catholicism, Jews would be known as Jewic. Of course, there is Judaic, but nobody refers to Judaic comedians. The Methodist or Baptist examples would result in being Jewist. If Jews were like Episcopalians, they’d be Jewians. Of course, there is Judean, but nobody goes to work out at a Judean Community Center. The again, the Jewish people have been around longer than many other religions. So, what if the question is reversed, and other religions followed the Jewish example? It would jarringly change the nomenclature of all the Christish people who follow Christaism. Followers of Catholicism would be Catholish. Annually there would be a convening of the Southern Baptish Convention. The Methodish would sound more like a cooking show and less like theatre students trained in Stanislavsky’s teachings. Rather than Jewians, the world would be graced with millions of the Episcopaliish. A very popular Broadway musical HOW DID WE would be “The Book of Mormish.” GET “ISH” AT THE Of course, these are other world reliEND OF “JEWISH” gions that could be considered. There are many more religions, but these examples — AND WHAT IF sport almost all permutations of religion OTHER FAITHS name endings, unless one wants to explore FOLLOWED SUIT? being Sikhish or Jewhovah’s Witnish. However, this has considered the question of the Jewish name relative to other religions. A tale as old as time is whether the Jewish people are a religion or a race. Looking at other people around the world, some nationalities or ethnicities actually have a suffix affixed similar to the Jews. The Amish are an obvious example, and one who themselves would probably face similar race-or-religion questions if they had a Talmud to debate. The Cornish and their game hens also fit somewhere into this pecking order. The British. The Irish. The Swedish. The Polish. The Spanish. The Scottish... Whose name is far more conducive to a traditional Jewish drink than the short-lived Jewtch, which was a better drink than Manischewitz but was too hard to pronounce when ordering at the bar. Appropriately enough, the Finnish could end the list. But one would be remiss to omit one of the largest domestic populations on our home world: the Heimisch. To revisit the previous reversal, consider other names of nations if they followed the tradition of Jewish name endings. (This is still about large groups of people, not about someone named Christianstein or Rosenchrist.) The people of the United States would be known as Americish. The Spanish would be bordered by the Portugish and Frenchish, which continued on the previous page