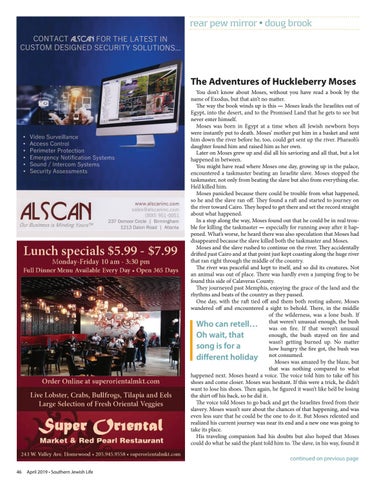 The Adventures of Huckleberry Moses You don’t know about Moses, without you have read a book by the name of Exodus, but that ain’t no matter. The way the book winds up is this — Moses leads the Israelites out of Egypt, into the desert, and to the Promised Land that he gets to see but never enter himself. Moses was born in Egypt at a time when all Jewish newborn boys were instantly put to death. Moses’ mother put him in a basket and sent him down the river before he, too, could get sent up the river. Pharaoh’s daughter found him and raised him as her own. Later on Moses grew up and did all his savioring and all that, but a lot happened in between. You might have read where Moses one day, growing up in the palace, encountered a taskmaster beating an Israelite slave. Moses stopped the taskmaster, not only from beating the slave but also from everything else. He’d killed him. Moses panicked because there could be trouble from what happened, so he and the slave ran off. They found a raft and started to journey on the river toward Cairo. They hoped to get there and set the record straight about what happened. In a stop along the way, Moses found out that he could be in real trouble for killing the taskmaster — especially for running away after it happened. What’s worse, he heard there was also speculation that Moses had disappeared because the slave killed both the taskmaster and Moses. Moses and the slave rushed to continue on the river. They accidentally drifted past Cairo and at that point just kept coasting along the huge river that ran right through the middle of the country. The river was peaceful and kept to itself, and so did its creatures. Not an animal was out of place. There was hardly even a jumping frog to be found this side of Calaveras County. They journeyed past Memphis, enjoying the grace of the land and the rhythms and beats of the country as they passed. One day, with the raft tied off and them both resting ashore, Moses wandered off and encountered a sight to behold. There, in the middle of the wilderness, was a lone bush. If weren’t unusual enough, the bush Who can retell… that was on fire. If that weren’t unusual enough, the bush stayed on fire and Oh wait, that wasn’t getting burned up. No matter song is for a how hungry the fire got, the bush was consumed. different holiday notMoses was amazed by the blaze, but that was nothing compared to what happened next. Moses heard a voice. The voice told him to take off his shoes and come closer. Moses was hesitant. If this were a trick, he didn’t want to lose his shoes. Then again, he figured it wasn’t like he’d be losing the shirt off his back, so he did it. The voice told Moses to go back and get the Israelites freed from their slavery. Moses wasn’t sure about the chances of that happening, and was even less sure that he could be the one to do it. But Moses relented and realized his current journey was near its end and a new one was going to take its place. His traveling companion had his doubts but also hoped that Moses could do what he said the plant told him to. The slave, in his way, found it continued on previous page 46