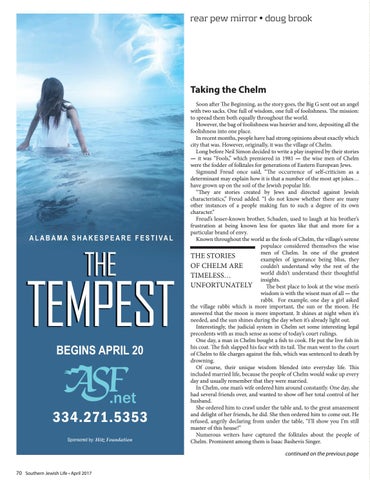 Soon after The Beginning, as the story goes, the Big G sent out an angel with two sacks. One full of wisdom, one full of foolishness. The mission: to spread them both equally throughout the world. However, the bag of foolishness was heavier and tore, depositing all the foolishness into one place. In recent months, people have had strong opinions about exactly which city that was. However, originally, it was the village of Chelm. Long before Neil Simon decided to write a play inspired by their stories — it was “Fools,” which premiered in 1981 — the wise men of Chelm were the fodder of folktales for generations of Eastern European Jews. Sigmund Freud once said, “The occurrence of self-criticism as a determinant may explain how it is that a number of the most apt jokes… have grown up on the soil of the Jewish popular life. “They are stories created by Jews and directed against Jewish characteristics,” Freud added. “I do not know whether there are many other instances of a people making fun to such a degree of its own character.” Freud’s lesser-known brother, Schaden, used to laugh at his brother’s frustration at being known less for quotes like that and more for a particular brand of envy. Known throughout the world as the fools of Chelm, the village’s serene populace considered themselves the wise men of Chelm. In one of the greatest THE STORIES examples of ignorance being bliss, they OF CHELM ARE couldn’t understand why the rest of the world didn’t understand their thoughtful TIMELESS… insights. UNFORTUNATELY The best place to look at the wise men’s wisdom is with the wisest man of all — the rabbi. For example, one day a girl asked the village rabbi which is more important, the sun or the moon. He answered that the moon is more important. It shines at night when it’s needed, and the sun shines during the day when it’s already light out. Interestingly, the judicial system in Chelm set some interesting legal precedents with as much sense as some of today’s court rulings. One day, a man in Chelm bought a fish to cook. He put the live fish in his coat. The fish slapped his face with its tail. The man went to the court of Chelm to file charges against the fish, which was sentenced to death by drowning. Of course, their unique wisdom blended into everyday life. This included married life, because the people of Chelm would wake up every day and usually remember that they were married. In Chelm, one man’s wife ordered him around constantly. One day, she had several friends over, and wanted to show off her total control of her husband. She ordered him to crawl under the table and, to the great amazement and delight of her friends, he did. She then ordered him to come out. He refused, angrily declaring from under the table, “I’ll show you I’m still master of this house!” Numerous writers have captured the folktales about the people of Chelm. Prominent among them is Isaac Bashevis Singer. continued on the previous page 70 Southern Jewish Life • April 2017