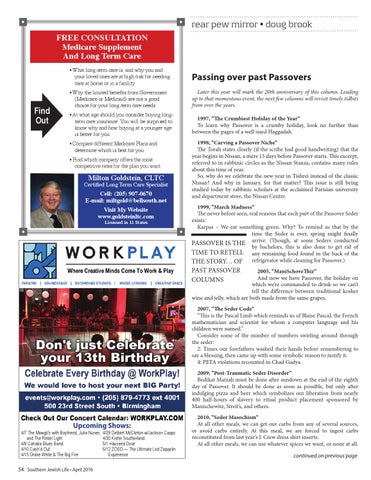 FREE CONSULTATION Medicare Supplement And Long Term Care • What long-term care is, and why you and your loved ones are at high risk for needing care at home or in a facility

Passing over past Passovers

Later this year will mark the 20th anniversary of this column. Leading up to that momentous event, the next few columns will revisit timely tidbits from over the years.   1997, “The Crumbiest Holiday of the Year” To learn why Passover is a crumby holiday, look no further than between the pages of a well-used Haggadah.

• At what age should you consider buying longterm care insurance. You will be surprised to know why and how buying at a younger age is better for you. • Compare different Medicare Plans and determine which is best for you

• Find which company offers the most competitive rates for the plan you want.

1998, “Carving a Passover Niche” The Torah states clearly (if the scribe had good handwriting) that the year begins in Nissan, a mere 15 days before Passover starts. This excerpt, referred to in rabbinic circles as the Nissan Stanza, contains many rules about this time of year. So, why do we celebrate the new year in Tishrei instead of the classic Nissan? And why in January, for that matter? This issue is still being studied today by rabbinic scholars at the acclaimed Parisian university and department store, the Nissan Centre. 1999, “March Madness” The never before seen, real reasons that each part of the Passover Seder exists: Karpas –  We eat something green. Why? To remind us that by the time the Seder is over, spring might finally PASSOVER IS THE arrive. (Though, at some Seders conducted by bachelors, this is also done to get rid of TIME TO RETELL any remaining food found in the back of the THE STORY… OF refrigerator while cleaning for Passover.)

2005, “ManiSchoveThiz” And now we have Passover, the holiday on which we’re commanded to drink so we can’t tell the difference between traditional kosher wine and jelly, which are both made from the same grapes. 2007, “The Seder Code” “This is the Pascal Limb which reminds us of Blaise Pascal, the French mathematician and scientist for whom a computer language and his children were named.” Consider some of the number of numbers swirling around through the seder: 2: Times our forefathers washed their hands before remembering to say a blessing, then came up with some symbolic reason to justify it. 4: PETA violations recounted in Chad Gadya. 2009, “Post-Traumatic Seder Disorder” Bedikat Matzah must be done after sundown at the end of the eighth day of Passover. It should be done as soon as possible, but only after indulging pizza and beer which symbolizes our liberation from nearly 400 half-hours of slavery to ritual product placement sponsored by Manischewitz, Streit’s, and others.