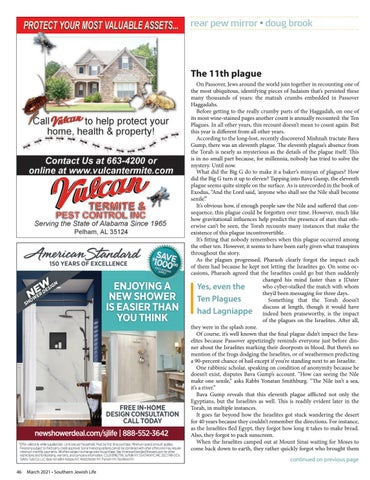 ENJOYING A NEW SHOWER IS EASIER THAN YOU THINK

newshowerdeal.com/sjlife | 888-552-3642 *Offer valid only while supplies last. Limit one per household. Must be first time purchase. Minimum spend amount applies. Financing subject to third party credit approval. Some financing options cannot be combined with other offers and may require minimum monthly payments. All offers subject to change prior to purchase. See AmericanStandardShowers.com for other restrictions and for licensing, warranty, and company information. CSLB B982796; Suffolk NY: 55431H;NYC:HIC 2022748-DCA. Safety Tubs Co. LLC does not sell in Nassau NY, Westchester NY, Putnam NY, Rockland NY.

On Passover, Jews around the world join together in recounting one of the most ubiquitous, identifying pieces of Judaism that’s persisted these many thousands of years: the matzah crumbs embedded in Passover Haggadahs. Before getting to the really crumby parts of the Haggadah, on one of its most wine-stained pages another count is annually recounted: the Ten Plagues. In all other years, this recount doesn’t mean to count again. But this year is different from all other years. According to the long-lost, recently discovered Mishnah tractate Bava Gump, there was an eleventh plague. The eleventh plague’s absence from the Torah is nearly as mysterious as the details of the plague itself. This is in no small part because, for millennia, nobody has tried to solve the mystery. Until now. What did the Big G do to make it a baker’s minyan of plagues? How did the Big G turn it up to eleven? Tapping into Bava Gump, the eleventh plague seems quite simple on the surface. As is unrecorded in the book of Exodus, “And the Lord said, ‘anyone who shall see the Nile shall become senile’.” It’s obvious how, if enough people saw the Nile and suffered that consequence, this plague could be forgotten over time. However, much like how gravitational influences help predict the presence of stars that otherwise can’t be seen, the Torah recounts many instances that make the existence of this plague incontrovertible. It’s fitting that nobody remembers when this plague occurred among the other ten. However, it seems to have been early given what transpires throughout the story. As the plagues progressed, Pharaoh clearly forgot the impact each of them had because he kept not letting the Israelites go. On some occasions, Pharaoh agreed that the Israelites could go but then suddenly changed his mind faster than a JDater who cyber-stalked the match with whom Yes, even the they’d been messaging for three days. Ten Plagues Something that the Torah doesn’t discuss at length, though it would have had Lagniappe indeed been praiseworthy, is the impact of the plagues on the Israelites. After all, they were in the splash zone. Of course, it’s well known that the final plague didn’t impact the Israelites because Passover appetizingly reminds everyone just before dinner about the Israelites marking their doorposts in blood. But there’s no mention of the frogs dodging the Israelites, or of weathermen predicting a 90-percent chance of hail except if you’re standing next to an Israelite. One rabbinic scholar, speaking on condition of anonymity because he doesn’t exist, disputes Bava Gump’s account. “How can seeing the Nile make one senile,” asks Rabbi Yonatan Smithburg. “The Nile isn’t a sea, it’s a river.” Bava Gump reveals that this eleventh plague afflicted not only the Egyptians, but the Israelites as well. This is readily evident later in the Torah, in multiple instances. It goes far beyond how the Israelites got stuck wandering the desert for 40 years because they couldn’t remember the directions. For instance, as the Israelites fled Egypt, they forgot how long it takes to make bread. Also, they forgot to pack sunscreen. When the Israelites camped out at Mount Sinai waiting for Moses to come back down to earth, they rather quickly forgot who brought them continued on previous page