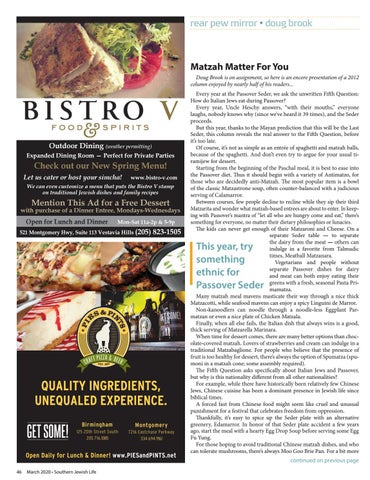 Matzah Matter For You Doug Brook is on assignment, so here is an encore presentation of a 2012 column enjoyed by nearly half of his readers...

Check out our New Spring Menu! Let us cater or host your simcha!

Mention This Ad for a Free Dessert

with purchase of a Dinner Entree, Mondays-Wednesdays

Every year at the Passover Seder, we ask the unwritten Fifth Question: How do Italian Jews eat during Passover? Every year, Uncle Heschy answers, “with their mouths,” everyone laughs, nobody knows why (since we’ve heard it 39 times), and the Seder proceeds. But this year, thanks to the Mayan prediction that this will be the Last Seder, this column reveals the real answer to the Fifth Question, before it’s too late. Of course, it’s not as simple as an entrée of spaghetti and matzah balls, because of the spaghetti. And don’t even try to argue for your usual tiramijew for dessert. Starting from the beginning of the Paschal meal, it is best to ease into the Passover diet. Thus it should begin with a variety of Antimatzo, for those who are decidedly anti-Matzah. The most popular item is a bowl of the classic Matzastrone soup, often counter-balanced with a judicious serving of Calamarror. Between courses, few people decline to recline while they sip their third Matzarita and wonder what matzah-based entrees are about to enter. In keeping with Passover’s mantra of “let all who are hungry come and eat,” there’s something for everyone, no matter their dietary philosophies or lunacies. The kids can never get enough of their Matzaroni and Cheese. On a separate Seder table — to separate the dairy from the meat — others can indulge in a favorite from Talmudic times, Meatball Matzanara. Vegetarians and people without separate Passover dishes for dairy and meat can both enjoy eating their greens with a fresh, seasonal Pasta Primamatza. Many matzah meal mavens masticate their way through a nice thick Matzacotti, while seafood mavens can enjoy a spicy Linguini de Marror. Non-kanoodlers can noodle through a noodle-less Eggplant Parmatzan or even a nice plate of Chicken Matzala. Finally, when all else fails, the Italian dish that always wins is a good, thick serving of Matzarella Marinara. When time for dessert comes, there are many better options than chocolate-covered matzah. Lovers of strawberries and cream can indulge in a traditional Matzabaglione. For people who believe that the presence of fruit is too healthy for dessert, there’s always the option of Spumatza (spumoni in a matzah cone; some assembly required). The Fifth Question asks specifically about Italian Jews and Passover, but why is this nationality different from all other nationalities? For example, while there have historically been relatively few Chinese Jews, Chinese cuisine has been a dominant presence in Jewish life since biblical times. A forced fast from Chinese food might seem like cruel and unusual punishment for a festival that celebrates freedom from oppression. Thankfully, it’s easy to spice up the Seder plate with an alternative greenery, Edamarror. In honor of that Seder plate accident a few years ago, start the meal with a hearty Egg Drop Soup before serving some Egg Fu Yung. For those hoping to avoid traditional Chinese matzah dishes, and who can tolerate mushrooms, there’s always Moo Goo Brie Pan. For a bit more

This year, try something ethnic for Passover Seder