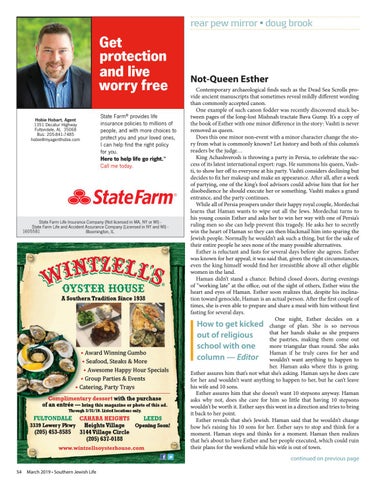 State Farm® provides life insurance policies to millions of people, and with more choices to protect you and your loved ones, I can help find the right policy for you. Here to help life go right.™ Call me today.

Not-Queen Esther Contemporary archaeological finds such as the Dead Sea Scrolls provide ancient manuscripts that sometimes reveal mildly different wording than commonly accepted canon. One example of such canon fodder was recently discovered stuck between pages of the long-lost Mishnah tractate Bava Gump. It’s a copy of the book of Esther with one minor difference in the story: Vashti is never removed as queen. Does this one minor non-event with a minor character change the story from what is commonly known? Let history and both of this column’s readers be the judge… King Achashverosh is throwing a party in Persia, to celebrate the success of its latest international export: rugs. He summons his queen, Vashti, to show her off to everyone at his party. Vashti considers declining but decides to fix her makeup and make an appearance. After all, after a week of partying, one of the king’s fool advisors could advise him that for her disobedience he should execute her or something. Vashti makes a grand entrance, and the party continues. While all of Persia prospers under their happy royal couple, Mordechai learns that Haman wants to wipe out all the Jews. Mordechai turns to his young cousin Esther and asks her to win her way with one of Persia’s ruling men so she can help prevent this tragedy. He asks her to secretly win the heart of Haman so they can then blackmail him into sparing the Jewish people. Normally he wouldn’t ask such a thing, but for the sake of their entire people he sees none of the many possible alternatives. Esther is reluctant and fasts for several days before she agrees. Esther was known for her appeal; it was said that, given the right circumstances, even the king himself would find her irresistible above all other eligible women in the land. Haman didn’t stand a chance. Behind closed doors, during evenings of “working late” at the office, out of the sight of others, Esther wins the heart and eyes of Haman. Esther soon realizes that, despite his inclination toward genocide, Haman is an actual person. After the first couple of times, she is even able to prepare and share a meal with him without first fasting for several days. One night, Esther decides on a How to get kicked change of plan. She is so nervous that her hands shake as she prepares out of religious the pastries, making them come out more triangular than round. She asks school with one Haman if he truly cares for her and column — Editor wouldn’t want anything to happen to her. Haman asks where this is going. Esther assures him that’s not what she’s asking. Haman says he does care for her and wouldn’t want anything to happen to her, but he can’t leave his wife and 10 sons. Esther assures him that she doesn’t want 10 stepsons anyway. Haman asks why not, does she care for him so little that having 10 stepsons wouldn’t be worth it. Esther says this went in a direction and tries to bring it back to her point. Esther reveals that she’s Jewish. Haman said that he wouldn’t change how he’s raising his 10 sons for her. Esther says to stop and think for a moment. Haman stops and thinks for a moment. Haman then realizes that he’s about to have Esther and her people executed, which could ruin their plans for the weekend while his wife is out of town. continued on previous page