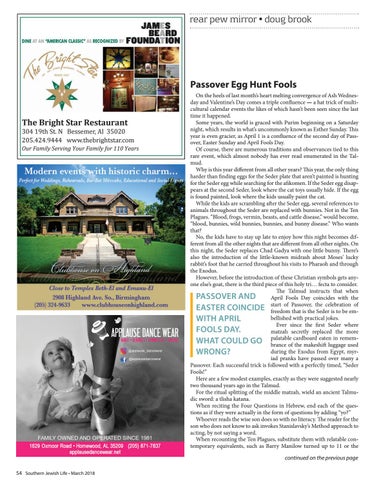 Our Family Serving Your Family for 110 Years

On the heels of last month’s heart melting convergence of Ash Wednesday and Valentine’s Day comes a triple confluence — a hat trick of multicultural calendar events the likes of which hasn’t been seen since the last time it happened. Some years, the world is graced with Purim beginning on a Saturday night, which results in what’s uncommonly known as Esther Sunday. This year is even gracier, as April 1 is a confluence of the second day of Passover, Easter Sunday and April Fools Day. Of course, there are numerous traditions and observances tied to this rare event, which almost nobody has ever read enumerated in the Talmud. Why is this year different from all other years? This year, the only thing harder than finding eggs for the Seder plate that aren’t painted is hunting for the Seder egg while searching for the afikomen. If the Seder egg disappears at the second Seder, look where the cat toys usually hide. If the egg is found painted, look where the kids usually paint the cat. While the kids are scrambling after the Seder egg, several references to animals throughout the Seder are replaced with bunnies. Not in the Ten Plagues. “Blood, frogs, vermin, beasts, and cattle disease,” would become, “blood, bunnies, wild bunnies, bunnies, and bunny disease.” Who wants that? No, the kids have to stay up late to enjoy how this night becomes different from all the other nights that are different from all other nights. On this night, the Seder replaces Chad Gadya with one little bunny. There’s also the introduction of the little-known midrash about Moses’ lucky rabbit’s foot that he carried throughout his visits to Pharaoh and through the Exodus. However, before the introduction of these Christian symbols gets anyone else’s goat, there is the third piece of this holy tri… fecta to consider. The Talmud instructs that when PASSOVER AND April Fools Day coincides with the of Passover, the celebration of EASTER COINCIDE start freedom that is the Seder is to be embellished with practical jokes. WITH APRIL Ever since the first Seder where FOOLS DAY. matzah secretly replaced the more cardboard eaten in rememWHAT COULD GO palatable brance of the makeshift luggage used during the Exodus from Egypt, myrWRONG? iad pranks have passed over many a Passover. Each successful trick is followed with a perfectly timed, “Seder Fools!” Here are a few modest examples, exactly as they were suggested nearly two thousand years ago in the Talmud. For the ritual splitting of the middle matzah, wield an ancient Talmudic sword: a tlisha katana. When reciting the Four Questions in Hebrew, end each of the questions as if they were actually in the form of questions by adding “yo?” Whoever reads the wise son does so with no literacy. The reader for the son who does not know to ask invokes Stanislavsky’s Method approach to acting, by not saying a word. When recounting the Ten Plagues, substitute them with relatable contemporary equivalents, such as Barry Manilow turned up to 11 or the continued on the previous page