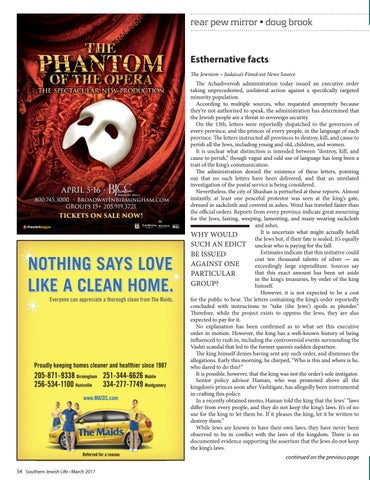 NOTHING SAYS LOVE LIKE A CLEAN HOME. Everyone can appreciate a thorough clean from The Maids.

Referred for a reason.

The Achashverosh administration today issued an executive order taking unprecedented, unilateral action against a specifically targeted minority population. According to multiple sources, who requested anonymity because they’re not authorized to speak, the administration has determined that the Jewish people are a threat to sovereign security. On the 13th, letters were reportedly dispatched to the governors of every province, and the princes of every people, in the language of each province. The letters instructed all provinces to destroy, kill, and cause to perish all the Jews, including young and old, children, and women. It is unclear what distinction is intended between “destroy, kill, and cause to perish,” though vague and odd use of language has long been a trait of the king’s communication. The administration denied the existence of these letters, pointing out that no such letters have been delivered, and that an unrelated investigation of the postal service is being considered. Nevertheless, the city of Shushan is perturbed at these reports. Almost instantly, at least one peaceful protestor was seen at the king’s gate, dressed in sackcloth and covered in ashes. Word has traveled faster than the official orders. Reports from every province indicate great mourning for the Jews, fasting, weeping, lamenting, and many wearing sackcloth and ashes. It is uncertain what might actually befall WHY WOULD the Jews but, if their fate is sealed, it’s equally SUCH AN EDICT unclear who is paying for the fall. Estimates indicate that this initiative could BE ISSUED cost ten thousand talents of silver — an AGAINST ONE exceedingly large expenditure. Sources say that this exact amount has been set aside PARTICULAR in the king’s treasuries, by order of the king GROUP? himself. However, it is not expected to be a cost for the public to bear. The letters containing the king’s order reportedly concluded with instructions to “take (the Jews’) spoils as plunder.” Therefore, while the project exists to oppress the Jews, they are also expected to pay for it. No explanation has been confirmed as to what set this executive order in motion. However, the king has a well-known history of being influenced to rush in, including the controversial events surrounding the Vashti scandal that led to the former queen’s sudden departure. The king himself denies having sent any such order, and dismisses the allegations. Early this morning, he chirped, “Who is this and where is he, who dared to do this?” It is possible, however, that the king was not the order’s sole instigator. Senior policy advisor Haman, who was promoted above all the kingdom’s princes soon after Vashtigate, has allegedly been instrumental in crafting this policy. In a recently obtained memo, Haman told the king that the Jews’ “laws differ from every people, and they do not keep the king’s laws. It’s of no use for the king to let them be. If it pleases the king, let it be written to destroy them.” While Jews are known to have their own laws, they have never been observed to be in conflict with the laws of the kingdom. There is no documented evidence supporting the assertion that the Jews do not keep the king’s laws. continued on the previous page