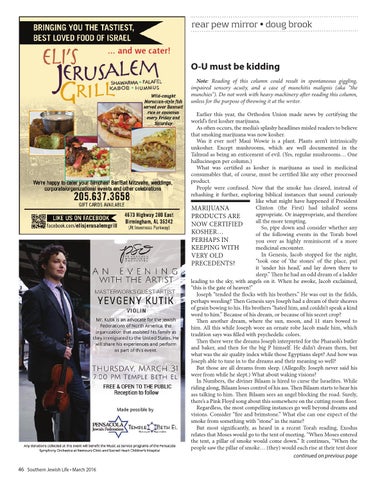 … and we cater! O-U must be kidding

Note: Reading of this column could result in spontaneous giggling, impaired sensory acuity, and a case of munchitis malignis (aka “the munchies”). Do not work with heavy machinery after reading this column, unless for the purpose of throwing it at the writer. Earlier this year, the Orthodox Union made news by certifying the world’s first kosher marijuana. As often occurs, the media’s splashy headlines misled readers to believe that smoking marijuana was now kosher. Was it ever not? Maui Wowie is a plant. Plants aren’t intrinsically unkosher. Except mushrooms, which are well documented in the Talmud as being an enticement of evil. (Yes, regular mushrooms… One hallucinogen per column.) What was certified as kosher is marijuana as used in medicinal consumables that, of course, must be certified like any other processed product. People were confused. Now that the smoke has cleared, instead of rehashing it further, exploring biblical instances that sound curiously like what might have happened if President Clinton (the First) had inhaled seems MARIJUANA appropriate. Or inappropriate, and therefore PRODUCTS ARE all the more tempting. NOW CERTIFIED So, pipe down and consider whether any KOSHER… of the following events in the Torah bowl PERHAPS IN you over as highly reminiscent of a more medicinal encounter. KEEPING WITH In Genesis, Jacob stopped for the night, VERY OLD “took one of ‘the stones’ of the place, put PRECEDENTS? it ‘under his head,’ and lay down there to sleep.” Then he had an odd dream of a ladder leading to the sky, with angels on it. When he awoke, Jacob exclaimed, “this is the gate of heaven!” Joseph “tended the flocks with his brothers.” He was out in the fields, perhaps weeding? Then Genesis says Joseph had a dream of their sheaves of grain bowing to his. His brothers “hated him, and couldn’t speak a kind word to him.” Because of his dream, or because of his secret crop? Then another dream, where the sun, moon, and 11 stars bowed to him. All this while Joseph wore an ornate robe Jacob made him, which tradition says was filled with psychedelic colors. Then there were the dreams Joseph interpreted for the Pharaoh’s butler and baker, and then for the big P himself. He didn’t dream them, but what was the air quality index while those Egyptians slept? And how was Joseph able to tune in to the dreams and their meaning so well? But those are all dreams from sleep. (Allegedly. Joseph never said his were from while he slept.) What about waking visions? In Numbers, the diviner Bilaam is hired to curse the Israelites. While riding along, Bilaam loses control of his ass. Then Bilaam starts to hear his ass talking to him. Then Bilaam sees an angel blocking the road. Surely, there’s a Pink Floyd song about this somewhere on the cutting room floor. Regardless, the most compelling instances go well beyond dreams and visions. Consider “fire and brimstone.” What else can one expect of the smoke from something with “stone” in the name? But most significantly, as heard in a recent Torah reading, Exodus relates that Moses would go to the tent of meeting. “When Moses entered the tent, a pillar of smoke would come down.” It continues, “When the people saw the pillar of smoke… (they) would each rise at their tent door continued on previous page 46 Southern Jewish Life • March 2016