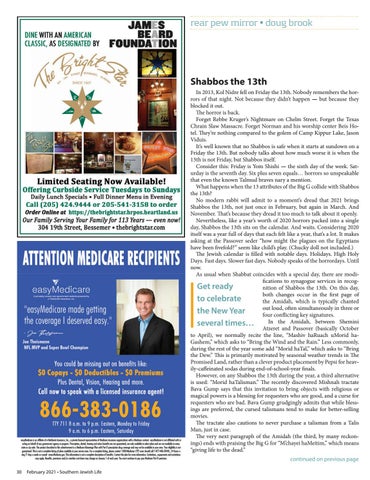 Shabbos the 13th In 2013, Kol Nidre fell on Friday the 13th. Nobody remembers the horrors of that night. Not because they didn’t happen — but because they blocked it out. The horror is back. Forget Rebbe Kruger’s Nightmare on Chelm Street. Forget the Texas Chrain Slaw Massacre. Forget Norman and his worship center Beis Hotel. They’re nothing compared to the golem of Camp Kippur Lake, Jason Viduis. It’s well known that no Shabbos is safe when it starts at sundown on a Friday the 13th. But nobody talks about how much worse it is when the 13th is not Friday, but Shabbos itself. Consider this: Friday is Yom Shishi — the sixth day of the week. Saturday is the seventh day. Six plus seven equals… horrors so unspeakable that even the known Talmud braves nary a mention. What happens when the 13 attributes of the Big G collide with Shabbos the 13th? No modern rabbi will admit to a moment’s dread that 2021 brings Shabbos the 13th, not just once in February, but again in March. And November. That’s because they dread it too much to talk about it openly. Nevertheless, like a year’s worth of 2020 horrors packed into a single day, Shabbos the 13th sits on the calendar. And waits. Considering 2020 itself was a year full of days that each felt like a year, that’s a lot. It makes asking at the Passover seder “how might the plagues on the Egyptians have been fivefold?” seem like child’s play. (Chucky doll not included.) The Jewish calendar is filled with notable days. Holidays. High Holy Days. Fast days. Slower fast days. Nobody speaks of the horrordays. Until now. As usual when Shabbat coincides with a special day, there are modifications to synagogue services in recogGet ready nition of Shabbos the 13th. On this day, both changes occur in the first page of to celebrate the Amidah, which is typically chanted out loud, often simultaneously in three or the New Year four conflicting key signatures. In the Amidah, between Shemini several times… Atzeret and Passover (basically October to April), we normally recite the line, “Mashiv haRuach uMorid haGashem,” which asks to “Bring the Wind and the Rain.” Less commonly, during the rest of the year some add “Morid haTal,” which asks to “Bring the Dew.” This is primarily motivated by seasonal weather trends in The Promised Land, rather than a clever product placement by Pepsi for heavily-caffeinated sodas during end-of-school-year finals. However, on any Shabbos the 13th during the year, a third alternative is used: “Morid haTalisman.” The recently discovered Mishnah tractate Bava Gump says that this invitation to bring objects with religious or magical powers is a blessing for requesters who are good, and a curse for requesters who are bad. Bava Gump grudgingly admits that while blessings are preferred, the cursed talismans tend to make for better-selling movies. The tractate also cautions to never purchase a talisman from a Talis Man, just in case. The very next paragraph of the Amidah (the third, by many reckonings) ends with praising the Big G for “M’chayei haMeitim,” which means “giving life to the dead.” continued on previous page 30