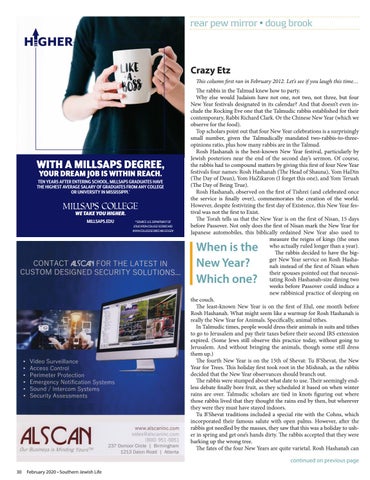 Crazy Etz This column first ran in February 2012. Let’s see if you laugh this time…

WITH A MILLSAPS DEGREE, YOUR DREAM JOB IS WITHIN REACH.

TEN YEARS AFTER ENTERING SCHOOL, MILLSAPS GRADUATES HAVE THE HIGHEST AVERAGE SALARY OF GRADUATES FROM ANY COLLEGE OR UNIVERSITY IN MISSISSIPPI.*

WE TAKE YOU HIGHER. MILLSAPS.EDU

The rabbis in the Talmud knew how to party. Why else would Judaism have not one, not two, not three, but four New Year festivals designated in its calendar? And that doesn’t even include the Rocking Eve one that the Talmudic rabbis established for their contemporary, Rabbi Richard Clark. Or the Chinese New Year (which we observe for the food). Top scholars point out that four New Year celebrations is a surprisingly small number, given the Talmudically mandated two-rabbis-to-threeopinions ratio, plus how many rabbis are in the Talmud. Rosh Hashanah is the best-known New Year festival, particularly by Jewish posteriors near the end of the second day’s sermon. Of course, the rabbis had to compound matters by giving this first of four New Year festivals four names: Rosh Hashanah (The Head of Shauna), Yom HaDin (The Day of Dean), Yom HaZikaron (I forget this one), and Yom Teruah (The Day of Being True). Rosh Hashanah, observed on the first of Tishrei (and celebrated once the service is finally over), commemorates the creation of the world. However, despite festivizing the first day of Existence, this New Year festival was not the first to Exist. The Torah tells us that the New Year is on the first of Nisan, 15 days before Passover. Not only does the first of Nisan mark the New Year for Japanese automobiles, this biblically ordained New Year also used to measure the reigns of kings (the ones who actually ruled longer than a year). The rabbis decided to have the bigger New Year service on Rosh Hashanah instead of the first of Nisan when their spouses pointed out that necessitating Rosh Hashanah-size dining two weeks before Passover could induce a new rabbinical practice of sleeping on the couch. The least-known New Year is on the first of Elul, one month before Rosh Hashanah. What might seem like a warmup for Rosh Hashanah is really the New Year for Animals. Specifically, animal tithes. In Talmudic times, people would dress their animals in suits and tithes to go to Jerusalem and pay their taxes before their second IRS extension expired. (Some Jews still observe this practice today, without going to Jerusalem. And without bringing the animals, though some still dress them up.) The fourth New Year is on the 15th of Shevat: Tu B’Shevat, the New Year for Trees. This holiday first took root in the Mishnah, as the rabbis decided that the New Year observances should branch out. The rabbis were stumped about what date to use. Their seemingly endless debate finally bore fruit, as they scheduled it based on when winter rains are over. Talmudic scholars are tied in knots figuring out where those rabbis lived that they thought the rains end by then, but wherever they were they must have stayed indoors. Tu B’Shevat traditions included a special rite with the Cohns, which incorporated their famous salute with open palms. However, after the rabbis got needled by the masses, they saw that this was a holiday to usher in spring and get one’s hands dirty. The rabbis accepted that they were barking up the wrong tree. The fates of the four New Years are quite varietal. Rosh Hashanah can

When is the New Year? Which one?