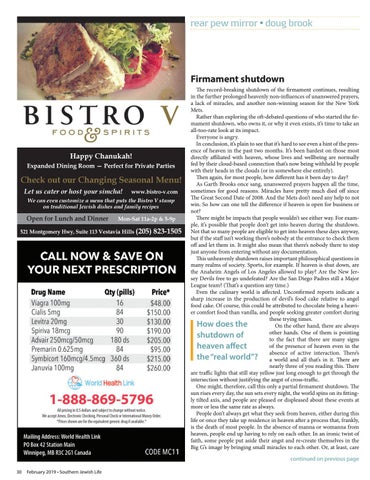 Check out our Changing Seasonal Menu! Let us cater or host your simcha!

The record-breaking shutdown of the firmament continues, resulting in the further prolonged heavenly non-influences of unanswered prayers, a lack of miracles, and another non-winning season for the New York Mets. Rather than exploring the oft-debated questions of who started the firmament shutdown, who owns it, or why it even exists, it’s time to take an all-too-rate look at its impact. Everyone is angry. In conclusion, it’s plain to see that it’s hard to see even a hint of the presence of heaven in the past two months. It’s been hardest on those most directly affiliated with heaven, whose lives and wellbeing are normally fed by their cloud-based connection that’s now being withheld by people with their heads in the clouds (or in somewhere else entirely). Then again, for most people, how different has it been day to day? As Garth Brooks once sang, unanswered prayers happen all the time, sometimes for good reasons. Miracles have pretty much died off since The Great Second Date of 2008. And the Mets don’t need any help to not win. So how can one tell the difference if heaven is open for business or not? There might be impacts that people wouldn’t see either way. For example, it’s possible that people don’t get into heaven during the shutdown. Not that so many people are eligible to get into heaven these days anyway, but if the staff isn’t working there’s nobody at the entrance to check them off and let them in. It might also mean that there’s nobody there to stop just anyone from entering without any documentation. This unheavenly shutdown raises important philosophical questions in many realms of society. Sports, for example. If heaven is shut down, are the Anaheim Angels of Los Angeles allowed to play? Are the New Jersey Devils free to go undefeated? Are the San Diego Padres still a Major League team? (That’s a question any time.) Even the culinary world is affected. Unconfirmed reports indicate a sharp increase in the production of devil’s food cake relative to angel food cake. Of course, this could be attributed to chocolate being a heavier comfort food than vanilla, and people seeking greater comfort during these trying times. How does the On the other hand, there are always other hands. One of them is pointing shutdown of to the fact that there are many signs of the presence of heaven even in the heaven affect absence of active interaction. There’s the “real world”? a world and all that’s in it. There are nearly three of you reading this. There are traffic lights that still stay yellow just long enough to get through the intersection without justifying the angst of cross-traffic. One might, therefore, call this only a partial firmament shutdown. The sun rises every day, the sun sets every night, the world spins on its fittingly tilted axis, and people are pleased or displeased about these events at more or less the same rate as always. People don’t always get what they seek from heaven, either during this life or once they take up residence in heaven after a process that, frankly, is the death of most people. In the absence of manna or womanna from heaven, people end up having to rely on each other. In an ironic twist of faith, some people put aside their angst and re-create themselves in the Big G’s image by bringing small miracles to each other. Or, at least, care continued on previous page