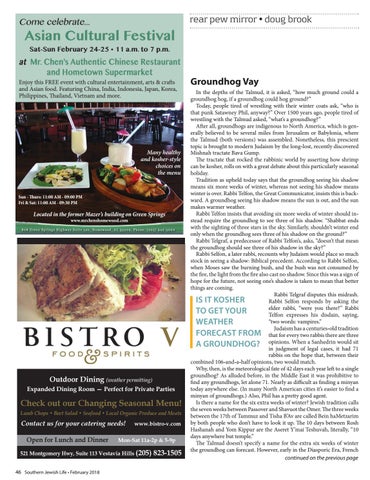 Many healthy and kosher-style choices on the menu

Located in the former Mazer’s building on Green Springs www.mrchenshomewood.com

Groundhog Vay In the depths of the Talmud, it is asked, “how much ground could a groundhog hog, if a groundhog could hog ground?” Today, people tired of wrestling with their winter coats ask, “who is that punk Satawney Phil, anyway?” Over 1500 years ago, people tired of wrestling with the Talmud asked, “what’s a groundhog?” After all, groundhogs are indigenous to North America, which is generally believed to be several miles from Jerusalem or Babylonia, where the Talmud (both versions) was assembled. Nonetheless, this prescient topic is brought to modern Judaism by the long-lost, recently discovered Mishnah tractate Bava Gump. The tractate that rocked the rabbinic world by asserting how shrimp can be kosher, rolls on with a great debate about this particularly seasonal holiday. Tradition as upheld today says that the groundhog seeing his shadow means six more weeks of winter, whereas not seeing his shadow means winter is over. Rabbi Telfon, the Great Communicator, insists this is backward. A groundhog seeing his shadow means the sun is out, and the sun makes warmer weather. Rabbi Telfon insists that avoiding six more weeks of winter should instead require the groundhog to see three of his shadow. “Shabbat ends with the sighting of three stars in the sky. Similarly, shouldn’t winter end only when the groundhog sees three of his shadow on the ground?” Rabbi Telgraf, a predecessor of Rabbi Telfon’s, asks, “doesn’t that mean the groundhog should see three of his shadow in the sky?” Rabbi Selfon, a later rabbi, recounts why Judaism would place so much stock in seeing a shadow: Biblical precedent. According to Rabbi Selfon, when Moses saw the burning bush, and the bush was not consumed by the fire, the light from the fire also cast no shadow. Since this was a sign of hope for the future, not seeing one’s shadow is taken to mean that better things are coming. Rabbi Telgraf disputes this midrash. IS IT KOSHER Rabbi Selfon responds by asking the elder rabbi, “were you there?” Rabbi TO GET YOUR Telfon expresses his disdain, saying, “two words: vampires.” WEATHER Judaism has a centuries-old tradition FORECAST FROM that for every two rabbis there are three When a Sanhedrin would sit A GROUNDHOG? opinions. in judgment of legal cases, it had 71 rabbis on the hope that, between their combined 106-and-a-half opinions, two would match. Why, then, is the meteorological fate of 42 days each year left to a single groundhog? As alluded before, in the Middle East it was prohibitive to find any groundhogs, let alone 71. Nearly as difficult as finding a minyan today anywhere else. (In many North American cities it’s easier to find a minyan of groundhogs.) Also, Phil has a pretty good agent. Is there a name for the six extra weeks of winter? Jewish tradition calls the seven weeks between Passover and Shavuot the Omer. The three weeks between the 17th of Tammuz and Tisha B’Av are called Bein haMetzarim by both people who don’t have to look it up. The 10 days between Rosh Hashanah and Yom Kippur are the Aseret Y’mai Teshuvah, literally, “10 days anywhere but temple.” The Talmud doesn’t specify a name for the extra six weeks of winter the groundhog can forecast. However, early in the Diasporic Era, French continued on the previous page