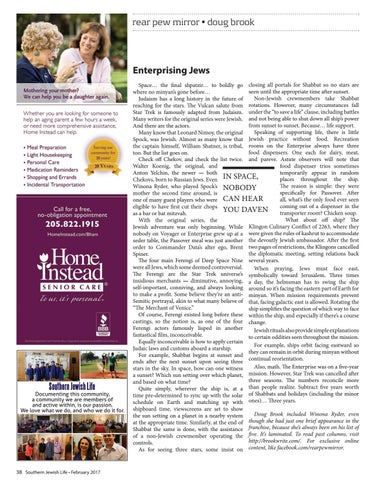 Documenting this community, a community we are members of and active within, is our passion. We love what we do, and who we do it for.

Space… the final shpatzir… to boldly go closing all portals for Shabbat so no stars are seen until the appropriate time after sunset. where no minyan’s gone before… Non-Jewish crewmembers take Shabbat Judaism has a long history in the future of reaching for the stars. The Vulcan salute from rotations. However, many circumstances fall Star Trek is famously adapted from Judaism. under the “to save a life” clause, including battles Many writers for the original series were Jewish. and not being able to shut down all ship’s power from sunset to sunset. Because… life support. And there are the actors. Speaking of supporting life, there is little Many know that Leonard Nimoy, the original Spock, was Jewish. Almost as many know that Jewish practice without food. Recreation the captain himself, William Shatner, is tribal, rooms on the Enterprise always have three food dispensers. One each for dairy, meat, too. But the list goes on. Check off Chekov, and check the list twice. and pareve. Astute observers will note that food dispenser trios sometimes Walter Koenig, the original, and temporarily appear in random Anton Yelchin, the newer — both places throughout the ship. Chekovs, born to Russian Jews. Even IN SPACE, The reason is simple: they were Winona Ryder, who played Spock’s NOBODY specifically for Passover. After mother the second time around, is all, what’s the only food ever seen one of many guest players who were CAN HEAR out of a dispenser in the eligible to have first cut their chops YOU DAVEN coming transporter room? Chicken soup. as a bar or bat mitzvah. What about off ship? The With the original series, the Jewish adventure was only beginning. While Klingon Culinary Conflict of 2263, where they nobody on Voyager or Enterprise grew up at a were given the rules of kashrut to accommodate seder table, the Passover meal was just another the devoutly Jewish ambassador. After the first order to Commander Data’s alter ego, Brent two pages of restrictions, the Klingons cancelled the diplomatic meeting, setting relations back Spiner. The four main Ferengi of Deep Space Nine several years. were all Jews, which some deemed controversial. When praying, Jews must face east, The Ferengi are the Star Trek universe’s symbolically toward Jerusalem. Three times insidious merchants — diminutive, annoying, a day, the helmsman has to swing the ship self-important, conniving, and always looking around so it’s facing the eastern part of Earth for to make a profit. Some believe they’re an anti- minyan. When mission requirements prevent Semitic portrayal, akin to what many believe of that, facing galactic east is allowed. Rotating the “The Merchant of Venice.” ship simplifies the question of which way to face Of course, Ferengi existed long before these within the ship, and especially if there’s a course castings, so the notion is, as one of the four change. Ferengi actors famously lisped in another Jewish rituals also provide simple explanations fantastical film, inconceivable. to certain oddities seen throughout the mission. Equally inconceivable is how to apply certain For example, ships orbit facing eastward so Judaic laws and customs aboard a starship. they can remain in orbit during minyan without For example, Shabbat begins at sunset and continual reorientation. ends after the next sunset upon seeing three Also, math. The Enterprise was on a five-year stars in the sky. In space, how can one witness a sunset? Which sun setting over which planet, mission. However, Star Trek was cancelled after three seasons. The numbers reconcile more and based on what time? Quite simply, wherever the ship is, at a than people realize. Subtract five years worth time pre-determined to sync up with the solar of Shabbats and holidays (including the minor schedule on Earth and matching up with ones)… Three years. shipboard time, viewscreens are set to show Doug Brook included Winona Ryder, even the sun setting on a planet in a nearby system though she had just one brief appearance in the at the appropriate time. Similarly, at the end of Shabbat the same is done, with the assistance franchise, because she’s always been on his list of of a non-Jewish crewmember operating the five. It’s laminated. To read past columns, visit http://brookwrite.com/. For exclusive online controls. As for seeing three stars, some insist on content, like facebook.com/rearpewmirror.