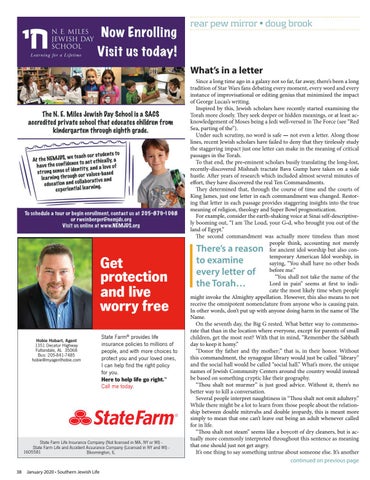 What’s in a letter

State Farm® provides life insurance policies to millions of people, and with more choices to protect you and your loved ones, I can help find the right policy for you. Here to help life go right.™ Call me today.

Since a long time ago in a galaxy not so far, far away, there’s been a long tradition of Star Wars fans debating every moment, every word and every instance of improvisational or editing genius that minimized the impact of George Lucas’s writing. Inspired by this, Jewish scholars have recently started examining the Torah more closely. They seek deeper or hidden meanings, or at least acknowledgement of Moses being a Jedi well-versed in The Force (see “Red Sea, parting of the”). Under such scrutiny, no word is safe — not even a letter. Along those lines, recent Jewish scholars have failed to deny that they tirelessly study the staggering impact just one letter can make in the meaning of critical passages in the Torah. To that end, the pre-eminent scholars busily translating the long-lost, recently-discovered Mishnah tractate Bava Gump have taken on a side hustle. After years of research which included almost several minutes of effort, they have discovered the real Ten Commandments. They determined that, through the course of time and the courts of King James, just one letter in each commandment was changed. Restoring that letter in each passage provides staggering insights into the true meaning of religion, theology and Super Bowl prognostication. For example, consider the earth-shaking voice at Sinai self-descriptively booming out, “I am The Loud, your G-d, who brought you out of the land of Egypt.” The second commandment was actually more timeless than most people think, accounting not merely for ancient idol worship but also contemporary American Idol worship, in saying, “You shall have no other bods before me.” “You shall not take the name of the Lord in pain” seems at first to indicate the most likely time when people might invoke the Almighty appellation. However, this also means to not receive the omnipotent nomenclature from anyone who is causing pain. In other words, don’t put up with anyone doing harm in the name of The Name. On the seventh day, the Big G rested. What better way to commemorate that than in the location where everyone, except for parents of small children, get the most rest? With that in mind, “Remember the Sabbath day to keep it homy.” “Donor thy father and thy mother;” that is, in their honor. Without this commandment, the synagogue library would just be called “library” and the social hall would be called “social hall.” What’s more, the unique names of Jewish Community Centers around the country would instead be based on something cryptic like their geography. “Thou shalt not murmer” is just good advice. Without it, there’s no better way to kill a conversation. Several people interpret naughtiness in “Thou shalt not omit adultery.” While there might be a lot to learn from those people about the relationship between double mitzvahs and double jeopardy, this is meant more simply to mean that one can’t leave out being an adult whenever called for in life. “Thou shalt not steam” seems like a boycott of dry cleaners, but is actually more commonly interpreted throughout this sentence as meaning that one should just not get angry. It’s one thing to say something untrue about someone else. It’s another continued on previous page

There’s a reason to examine every letter of the Torah…