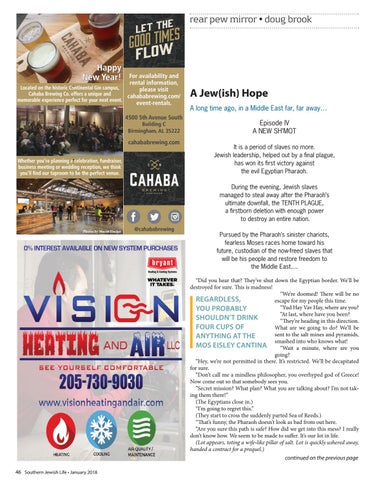 cahababrewing.com Whether you’re planning a celebration, fundraiser, business meeting or wedding reception, we think you’ll find our taproom to be the perfect venue.

A Jew(ish) Hope A long time ago, in a Middle East far, far away… Episode IV A NEW SH’MOT It is a period of slaves no more. Jewish leadership, helped out by a final plague, has won its first victory against the evil Egyptian Pharaoh. During the evening, Jewish slaves managed to steal away after the Pharaoh’s ultimate downfall, the TENTH PLAGUE, a firstborn deletion with enough power to destroy an entire nation.

Pursued by the Pharaoh’s sinister chariots, fearless Moses races home toward his future, custodian of the now-freed slaves that will be his people and restore freedom to the Middle East.... “Did you hear that? They’ve shut down the Egyptian border. We’ll be destroyed for sure. This is madness! “We’re doomed! There will be no REGARDLESS, escape for my people this time. “Yud Hay Vav Hay, where are you? YOU PROBABLY “At last, where have you been? SHOULDN’T DRINK “They’re heading in this direction. FOUR CUPS OF What are we going to do? We’ll be sent to the salt mines and pyramids, ANYTHING AT THE smashed into who knows what! MOS EISLEY CANTINA “Wait a minute, where are you going? “Hey, we’re not permitted in there. It’s restricted. We’ll be decapitated for sure. “Don’t call me a mindless philosopher, you overhyped god of Greece! Now come out so that somebody sees you. “Secret mission? What plan? What you are talking about? I’m not taking them there!” (The Egyptians close in.) “I’m going to regret this.” (They start to cross the suddenly parted Sea of Reeds.) “That’s funny, the Pharaoh doesn’t look as bad from out here. “Are you sure this path is safe? How did we get into this mess? I really don’t know how. We seem to be made to suffer. It’s our lot in life. (Lot appears, toting a wife-like pillar of salt. Lot is quickly ushered away, handed a contract for a prequel.) continued on the previous page