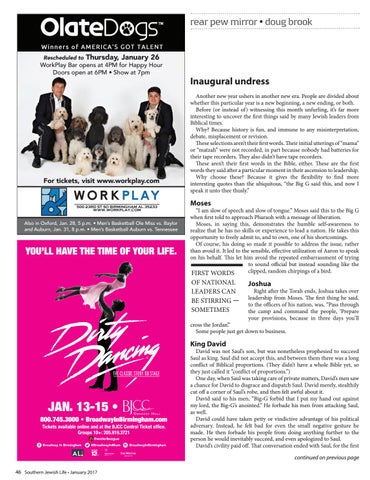 Another new year ushers in another new era. People are divided about whether this particular year is a new beginning, a new ending, or both. Before (or instead of) witnessing this month unfurling, it’s far more interesting to uncover the first things said by many Jewish leaders from Biblical times. Why? Because history is fun, and immune to any misinterpretation, debate, misplacement or revision. These selections aren’t their first words. Their initial utterings of “mama” or “matzah” were not recorded, in part because nobody had batteries for their tape recorders. They also didn’t have tape recorders. These aren’t their first words in the Bible, either. These are the first words they said after a particular moment in their ascension to leadership. Why choose these? Because it gives the flexibility to find more interesting quotes than the ubiquitous, “the Big G said this, and now I speak it unto thee thusly.”

YOU’LL HAVE THE TIME OF YOUR LIFE.

“I am slow of speech and slow of tongue.” Moses said this to the Big G when first told to approach Pharaoh with a message of liberation. Moses, in saying this, demonstrates the humble self-awareness to realize that he has no skills or experience to lead a nation. He takes this opportunity to freely admit to, and to own, one of his shortcomings. Of course, his doing so made it possible to address the issue, rather than avoid it. It led to the sensible, effective utilization of Aaron to speak on his behalf. This let him avoid the repeated embarrassment of trying to sound official but instead sounding like the clipped, random chirpings of a bird. FIRST WORDS

OF NATIONAL LEADERS CAN BE STIRRING — SOMETIMES

Right after the Torah ends, Joshua takes over leadership from Moses. The first thing he said, to the officers of his nation, was, “Pass through the camp and command the people, ‘Prepare your provisions, because in three days you’ll

cross the Jordan’.” Some people just get down to business.

David was not Saul’s son, but was nonetheless prophesied to succeed Saul as king. Saul did not accept this, and between them there was a long conflict of Biblical proportions. (They didn’t have a whole Bible yet, so they just called it “conflict of proportions.”) One day, when Saul was taking care of private matters, David’s men saw a chance for David to disgrace and dispatch Saul. David merely, stealthily cut off a corner of Saul’s robe, and then felt awful about it. David said to his men, “Big-G forbid that I put my hand out against my lord, the Big-G’s anointed.” He forbade his men from attacking Saul, as well. David could have taken petty or vindictive advantage of his political adversary. Instead, he felt bad for even the small negative gesture he made. He then forbade his people from doing anything further to the person he would inevitably succeed, and even apologized to Saul. David’s civility paid off. That conversation ended with Saul, for the first continued on previous page