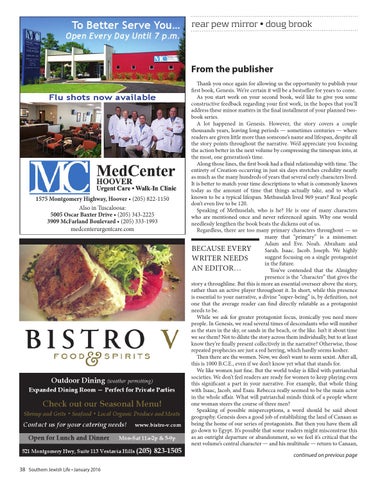 To Better Serve You…

Open Every Day Until 7 p.m.

Thank you once again for allowing us the opportunity to publish your first book, Genesis. We’re certain it will be a bestseller for years to come. As you start work on your second book, we’d like to give you some constructive feedback regarding your first work, in the hopes that you’ll address these minor matters in the final installment of your planned twobook series. A lot happened in Genesis. However, the story covers a couple thousands years, leaving long periods — sometimes centuries — where readers are given little more than someone’s name and lifespan, despite all the story points throughout the narrative. We’d appreciate you focusing the action better in the next volume by compressing the timespan into, at the most, one generation’s time. Along those lines, the first book had a fluid relationship with time. The entirety of Creation occurring in just six days stretches credulity nearly as much as the many hundreds of years that several early characters lived. It is better to match your time descriptions to what is commonly known today as the amount of time that things actually take, and to what’s known to be a typical lifespan. Methuselah lived 969 years? Real people don’t even live to be 120. Speaking of Methuselah, who is he? He is one of many characters who are mentioned once and never referenced again. Why one would needlessly lengthen the book beats the dickens out of us. Regardless, there are too many primary characters throughout — so many that “primary” is a misnomer. Adam and Eve. Noah. Abraham and BECAUSE EVERY Sarah. Isaac. Jacob. Joseph. We highly suggest focusing on a single protagonist WRITER NEEDS in the future. AN EDITOR… You’ve contended that the Almighty presence is the “character” that gives the story a throughline. But this is more an essential overseer above the story, rather than an active player throughout it. In short, while this presence is essential to your narrative, a divine “super-being” is, by definition, not one that the average reader can find directly relatable as a protagonist needs to be. While we ask for greater protagonist focus, ironically you need more people. In Genesis, we read several times of descendants who will number as the stars in the sky, or sands in the beach, or the like. Isn’t it about time we see them? Not to dilute the story across them individually, but to at least know they’re finally present collectively in the narrative? Otherwise, those repeated prophecies are just a red herring, which hardly seems kosher. Then there are the women. Now, we don’t want to seem sexist. After all, this is 1000 B.C.E., even if we don’t know yet what that stands for. We like women just fine. But the world today is filled with patriarchal societies. We don’t feel readers are ready for women to keep playing even this significant a part in your narrative. For example, that whole thing with Isaac, Jacob, and Esau. Rebecca really seemed to be the main actor in the whole affair. What will patriarchal minds think of a people where one woman steers the course of three men? Speaking of possible misperceptions, a word should be said about geography. Genesis does a good job of establishing the land of Canaan as being the home of our series of protagonists. But then you have them all go down to Egypt. It’s possible that some readers might misconstrue this as an outright departure or abandonment, so we feel it’s critical that the next volume’s central character — and his multitude — return to Canaan, continued on previous page