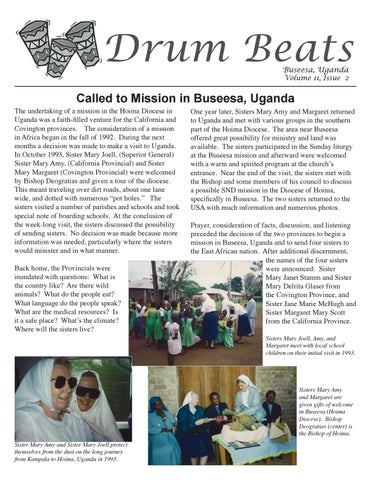 Called to Mission in Buseesa, Uganda

The undertaking of a mission in the Hoima Diocese in Uganda was a faith-filled venture for the California and Covington provinces. The consideration of a mission in Africa began in the fall of 1992. During the next months a decision was made to make a visit to Uganda. In October 1993, Sister Mary Joell, (Superior General) Sister Mary Amy, (California Provincial) and Sister Mary Margaret (Covington Provincial) were welcomed by Bishop Deogratias and given a tour of the diocese. This meant traveling over dirt roads, about one lane wide, and dotted with numerous “pot holes.” The sisters visited a number of parishes and schools and took special note of boarding schools. At the conclusion of the week-long visit, the sisters discussed the possibility of sending sisters. No decision was made because more information was needed, particularly where the sisters would minister and in what manner. Back home, the Provincials were inundated with questions: What is the country like? Are there wild animals? What do the people eat? What language do the people speak? What are the medical resources? Is it a safe place? What’s the climate? Where will the sisters live?

One year later, Sisters Mary Amy and Margaret returned to Uganda and met with various groups in the southern part of the Hoima Diocese. The area near Buseesa offered great possibility for ministry and land was available. The sisters participated in the Sunday liturgy at the Buseesa mission and afterward were welcomed with a warm and spirited program at the church’s entrance. Near the end of the visit, the sisters met with the Bishop and some members of his council to discuss a possible SND mission in the Diocese of Hoima, specifically in Buseesa. The two sisters returned to the USA with much information and numerous photos. Prayer, consideration of facts, discussion, and listening preceded the decision of the two provinces to begin a mission in Buseesa, Uganda and to send four sisters to the East African nation. After additional discernment, the names of the four sisters were announced: Sister Mary Janet Stamm and Sister Mary Delrita Glaser from the Covington Province, and Sister Jane Marie McHugh and Sister Margaret Mary Scott from the California Province. Sisters Mary Joell, Amy, and Margaret meet with local school children on their initial visit in 1993.

Sisters Mary Amy and Margaret are given gifts of welcome in Buseesa (Hoima Diocese). Bishop Deogratias (center) is the Bishop of Hoima. Sister Mary Amy and Sister Mary Joell protect themselves from the dust on the long journey from Kampala to Hoima, Uganda in 1993.

Preparing for the Mission

Preparing to begin a mission in another country was a new experience for both provinces. There was the preparation of the sisters, the collecting and packing things to take, and questions The four original missionaries, Sisters about how to Mary Delrita and Janet (Covington Province) and Sisters Margaret Mary and send materials to Jane Marie (California Province) prepare Uganda. Another for the move to Uganda. top priority was the planning and building of the convent. While in Uganda, the two provincials met with the architect and contractor of the Hoima Construction Company. The preparation was varied and lengthy. The four sisters participated in a program for missionaries sponsored by Maryknoll. At home they learned about farming and began gathering many things to take with them. The sisters visited each otherâ&#x20AC;&#x2122;s province to meet Sisters Mary Janet and Delrita weigh packages for one anotherâ&#x20AC;&#x2122;s family and the Uganda. sisters of the province. Packing days were tedious: Which province would send what? How much does it weigh? How much do we need to take now? Even more difficult were the many goodSister Mary Margaret shows the mission byes of the last crosses of Sisters Mary Delrita and Janet. weeks and days. The sisters received the crosses during the Finally, came missioning ceremony. the missioning ceremony in the context of the Liturgy, with each sister being missioned by her Provincial Superior and receiving a mission cross.

Where are Those First Four Missionaries Today?

Before being missioned to Uganda, Sister Mary Janet was serving as Principal at St. Mary School, Alexandria, Kentucky. Sister is still in Uganda and teaches at St. Julie Primary Boarding School. Until a new Head Teacher arrives, sister also serves as Deputy Head Teacher (Assistant Principal) at St. Julie. Sister Mary Delrita, in her capacity as a Registered Nurse, was working in the Quality Management Department at St. Claire Regional Medical Center in Morehead, Kentucky. Sister has served as librarian and nurse at St. Julie School in Uganda and currently works with young Ugandan women seeking to become Sisters of Notre Dame. Sister Jane was serving as Principal at St. Francis Assisi School in Los Angeles, California. In May of this year, Sister returned from Uganda. After spending a few months with her mother, Sister will return to teaching at St. Dominic School in Eagle Rock, California. Sister Margaret Mary was serving as Director of Religious Education at Sacred Heart Parish near Ventura, California. Sister returned to California in 1999. In September of 2004, she began ministry in Sacred Heart Parish.

Notre Dame Academy is involved in a very lengthy and complicated process of registration/licensing in Uganda. The sisters have completed the first half of the process and have the document that states that they can proceed to part two. In Uganda, almost every process is a bureaucratic tangle that requires many trips in order to even meet the appropriate people and secure the needed documents and signatures. On one trip to Kampala (several hours away), without an appointment, they were able to meet with the Minister of Education. It took two hours, but in the end they had completed the first step. This registration is needed to be a testing center for the Ugandan Certificate of Education (UCE). This testing will be in November of 2006 when the first NDA class completes its studies. If the registration is not obtained, the NDA students will need to be transported each day to a testing center. The nearest center is at least 45 minutes away by car, and there are not enough cars to transport a class. The exams at the secondary level are more difficult and traumatic than the PLE (Primary Leaving Exams). Work is now underway on the second step of the licensing process. Sister Mary Rita

It was with very mixed feelings that we welcomed the Bishop, other clergy, and parents of former and current students to join us for this farewell to Sister Jane. This day gave us the chance to express our gratitude to Sister for her very loving and dedicated leadership as the founding head teacher of St. Julie Primary Boarding School.

The children from St. Julie and NDA prepared special booklets for Sister. The adults brought a wide variety of Ugandan food and traditional art objects as gifts. The day began with Mass with the children singing and dancing, expressing gratitude to God and to Sister Jane. Mass was followed by a gathering around the flagpole, a salute to Uganda, and a tree planting ceremony. Two beautiful trees, one flowering white and one purple, were planted near the Primary Administration Building. A plaque of gratitude to be attached to the wall Sister Jane Marie and Sister Mary of this building was also Janet reflect on their ten years of teaching and service to the mission in presented to Sister. Buseesa.

After lunch, entertainment included singing, instrumental music, and dancing. Many speeches were given, and the day concluded with the Bishop blessing Sister Jane and all of us. On the actual day of departure, Sisters Jane, Janet, and Delrita climbed into the car and drove down the road. Children from both schools had gathered at the end of the road to say one last farewell. It was an impressive sight to see over 200 children lined up. Sister Jane had in some way assisted all of them in their education. Sister will be deeply missed by each of us. Sister Mary Rita

The Ugandan Martyrs are highly revered in Uganda. During the years 1885-1887, the King began a persecution of Christians. Some of these were young men who enjoyed the good graces of the king, and some were even related to him. Among those who died, were Charles Lwanga and his 21 companions who adhered steadfastly to the Catholic faith. Because they would not accede to the king’s demands, some were put to death by the sword, but most by being burned to death. One of the young men on his way to die a martyr’s death was Denis Kamyuka. At the last minute he was saved due to intervention by an aunt. Denis and his family lived in Buseesa. It seems Denis was serving in the king’s court in the mid-1880s. After the persecution, he returned to Buseesa and died a natural death in 1944. The land on which the church, convent, and school are built was given to the church by Denis’s family. The bricks from his home were used to build the present church. Annually, Mass is celebrated at the grave site and is well attended. At the 2003 celebration, Nakatura John, an elder from the parish who knew Denis personally, gave a witness to his experiences and memories of the wouldbe martyr. Denis Kamyuka is buried on a hill not far from the convent and school; a simple stone marks the spot. The sisters have visited the grave of Denis many times. The sisters believe that the strong faith of Denis had much to do with nurturing the life of the Church in the Buseesa area.

HOLIDAYS (?) For the weeks of the semester

break (called holidays) in May, most of the St. Julie and NDA students returned home. During the first week of holidays, the sisters visited several parishes to conduct parent-teacher conferences. Another week was spent catching up on all the needed cleaning, something like “spring cleaning.” Sister Mary Bernarde

Ugandans prepare to celebrate Mass at the grave of Denis Kamyuka. Denis was saved from martyrdom and returned to live in Buseesa. The grounds of the church, convent and school are on land given by Denis’s family.

This issue of Drum Beats begins a series of articles and photos about the beginnings of the mission in Buseesa, Uganda. The sisters arrived in Uganda in July 1995, ten years ago next month.

In addition to Sister Mary Delrita and Sister Mary Janet, from the Covington, KY Province, the other sisters presently serving in Buseesa, Uganda are the following: 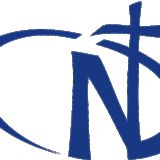