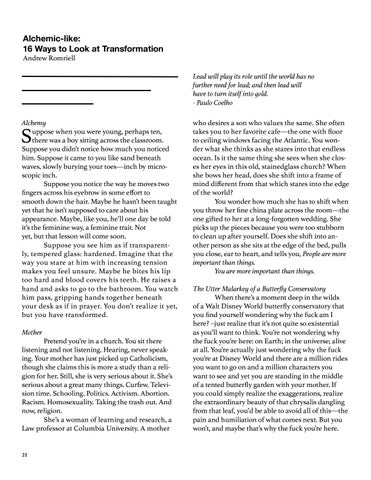 Lead will play its role until the world has no further need for lead; and then lead will have to turn itself into gold. - Paulo Coelho Alchemy uppose when you were young, perhaps ten, there was a boy sitting across the classroom. Suppose you didn’t notice how much you noticed him. Suppose it came to you like sand beneath waves, slowly burying your toes—inch by microscopic inch. Suppose you notice the way he moves two fingers across his eyebrow in some effort to smooth down the hair. Maybe he hasn’t been taught yet that he isn’t supposed to care about his appearance. Maybe, like you, he’ll one day be told it’s the feminine way, a feminine trait. Not yet, but that lesson will come soon. Suppose you see him as if transparently, tempered glass: hardened. Imagine that the way you stare at him with increasing tension makes you feel unsure. Maybe he bites his lip too hard and blood covers his teeth. He raises a hand and asks to go to the bathroom. You watch him pass, gripping hands together beneath your desk as if in prayer. You don’t realize it yet, but you have transformed.

Mother Pretend you’re in a church. You sit there listening and not listening. Hearing, never speaking. Your mother has just picked up Catholicism, though she claims this is more a study than a religion for her. Still, she is very serious about it. She’s serious about a great many things. Curfew. Television time. Schooling. Politics. Activism. Abortion. Racism. Homosexuality. Taking the trash out. And now, religion. She’s a woman of learning and research, a Law professor at Columbia University. A mother 21

who desires a son who values the same. She often takes you to her favorite cafe—the one with floor to ceiling windows facing the Atlantic. You wonder what she thinks as she stares into that endless ocean. Is it the same thing she sees when she closes her eyes in this old, stainedglass church? When she bows her head, does she shift into a frame of mind different from that which stares into the edge of the world? You wonder how much she has to shift when you throw her fine china plate across the room—the one gifted to her at a long-forgotten wedding. She picks up the pieces because you were too stubborn to clean up after yourself. Does she shift into another person as she sits at the edge of the bed, pulls you close, ear to heart, and tells you, People are more important than things. You are more important than things. The Utter Malarkey of a Butterfly Conservatory When there’s a moment deep in the wilds of a Walt Disney World butterfly conservatory that you find yourself wondering why the fuck am I here? –just realize that it’s not quite so existential as you’ll want to think. You’re not wondering why the fuck you’re here: on Earth; in the universe; alive at all. You’re actually just wondering why the fuck you’re at Disney World and there are a million rides you want to go on and a million characters you want to see and yet you are standing in the middle of a tented butterfly garden with your mother. If you could simply realize the exaggerations, realize the extraordinary beauty of that chrysalis dangling from that leaf, you’d be able to avoid all of this—the pain and humiliation of what comes next. But you won’t, and maybe that’s why the fuck you’re here. 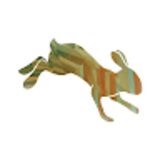