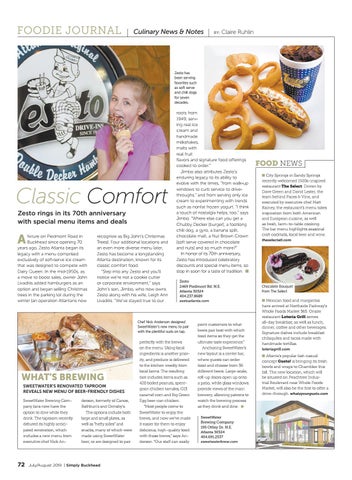 Zesto has been serving favorites such as soft serve and chili dogs for seven decades.

fixture on Piedmont Road in Buckhead since opening 70 years ago, Zesto Atlanta began its legacy with a menu comprised exclusively of soft-serve ice cream that was designed to compete with Dairy Queen. In the mid-1950s, as a move to boost sales, owner John Livaditis added hamburgers as an option and began selling Christmas trees in the parking lot during the winter (an operation Atlantans now

recognize as Big John’s Christmas Trees). Four additional locations and an even more diverse menu later, Zesto has become a longstanding Atlanta destination, known for its classic comfort food. “Step into any Zesto and you’ll notice we’re not a cookie cutter or corporate environment,” says John’s son, Jimbo, who now owns Zesto along with his wife, Leigh Ann Livaditis. “We’ve stayed true to our

roots from 1949, serving real ice cream and handmade milkshakes, malts with real fruit flavors and signature food offerings cooked to order.” Jimbo also attributes Zesto’s enduring legacy to its ability to evolve with the times, “from walk-up windows to curb service to drivethroughs,” and from serving only ice cream to experimenting with trends such as nonfat frozen yogurt. “I think a touch of nostalgia helps, too,” says Jimbo. “Where else can you get a Chubby Decker [burger], a footlong chili dog, a gyro, a banana split, chocolate malt, a Nut Brown Crown [soft serve covered in chocolate and nuts] and so much more?” In honor of its 70th anniversary, Zesto has introduced celebratory discounts and special menu items, so stop in soon for a taste of tradition. n Zesto 2469 Piedmont Rd. N.E. Atlanta 30324 404.237.8689 zestoatlanta.com

derson, formerly of Canoe, Rathbun’s and Ormsby’s. The options include both large and small plates, as well as “hefty sides” and snacks, many of which were made using SweetWater beer, or are designed to pair

perfectly with the brews on the menu. Using local ingredients is another priority, and produce is delivered to the kitchen weekly from local farms. The resulting fare includes items such as 420 boiled peanuts, spentgrain chicken tamales, G13 caramel corn and Big Green Egg beer-can chicken. “Most people come to SweetWater to enjoy the brews, and now we’ve made it easier for them to enjoy delicious, high-quality food with those brews,” says Anderson. “Our staff can easily

point customers to what beers pair best with which food items so they get the ultimate taste experience.” Anchoring SweetWater’s new layout is a center bar, where guests can order food and choose from 36 different beers. Large-scale, roll-up doors open up onto a patio, while glass windows provide views of the main brewery, allowing patrons to watch the brewing process as they drink and dine. n SweetWater Brewing Company 195 Ottley Dr. N.E. Atlanta 30324 404.691.2537 sweetwaterbrew.com

n Atlanta’s popular fast-casual concept Gusto! is bringing its fresh bowls and wraps to Chamblee this fall. The new location, which will be situated on Peachtree Industrial Boulevard near Whole Foods Market, will also be the first to offer a drive-through. whatsyourgusto.com

Simply Buckhead is the definitive resource for Atlanta's most dynamic intown neighborhood. With a commitment to journalistic excellence, the...

Simply Buckhead is the definitive resource for Atlanta's most dynamic intown neighborhood. With a commitment to journalistic excellence, the...