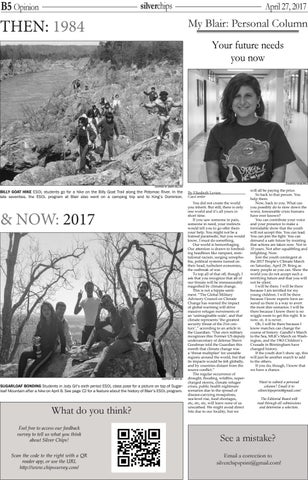 My Blair: Personal Column Your future needs you now

BILLY GOAT HIKE ESOL students go for a hike on the Billy Goat Trail along the Potomac River. In the late seventies, the ESOL program at Blair also went on a camping trip and to King’s Dominion.

SUGARLOAF BONDING Students in Jody Gil’s sixth period ESOL class pose for a picture on top of Sugarloaf Mountain after a hike on April 8. See page C2 for a feature about the history of Blair’s ESOL program.

What do you think? Feel free to access our feedback survey to tell us what you think about Silver Chips! Scan the code to the right with a QR reader app, or use the URL http://www.chipssurvey.com/

By Elizabeth Levien Guest writer You did not create the world you inherit. But still, there is only one world and it’s all yours in short time. If you saw someone in pain, someone in need, your instincts would tell you to go offer them your help. You might not be a trained paramedic, but you would know, I must do something. Our world is hemorrhaging. Our attention is drawn to foreboding headlines like rampant, institutional racism, surging xenophobia, political systems turned on their head, turbulent economies, the outbreak of war. To top all of that off, though, I ask that you recognize that all of our threats will be immeasurably magnified by climate change. This is not a hippie sentiment. “The Global Military Advisory Council on Climate Change has warned the impact of global warming will drive massive refugee movements of an ‘unimaginable scale’, and that climate represents ‘the greatest security threat of the 21st century’,” according to an article in the Guardian. “Our own military recognizes this: Former US deputy undersecretary of defense Sherri Goodman told the Guardian this month that climate change was a ‘threat multiplier’ for unstable regions around the world, but that its impacts would be felt globally, and by countries distant from the source conflict.” The regular occurrence of drought, flooding, wildfire, supercharged storms, climate refugee crises, public health nightmare scenarios due to the spread of disease-carrying mosquitoes, sea-level rise, food shortages, etc, etc, etc, will leave none of us unscathed. We might avoid direct hits due to our locality, but we

will all be paying the price. So back to that person. You help them. Now, back to you. What can you possibly do to slow down the worst, foreseeable crisis humans have ever known? You can contribute your voice and your presence to make a formidable show that the youth will not accept this. You can lead. You can join the fight. You can demand a safe future by insisting that actions are taken now. Not in 10 years. Not after squabbling and infighting. Now. Join the youth contingent at the 2017 People’s Climate March on Saturday, April 29. Bring as many people as you can. Show the world you do not accept such a terrifying future and that you will not be silent. I will be there. I will be there because I am terrified for my young children. I will be there because I know experts have assured us there is a way to avert the most dire scenarios. I will be there because I know there is no wiggle room to get this right. It is now, or, it is never. Oh, I will be there because I know marches can change the course of history. Gandhi’s March to the Sea, MLK’s March on Washington, and the 1963 Children’s Crusade in Birmingham have changed history. If the youth don’t show up, this will just be another march to add to the others. If you do, though, I know that we have a chance. Want to submit a personal column? Email it to silverchipsprint@gmail.com! The Editorial Board will read through all submissions and determine a selection.

See a mistake? Email a correction to silverchipsprint@gmail.com! 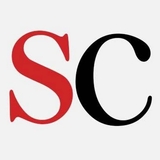