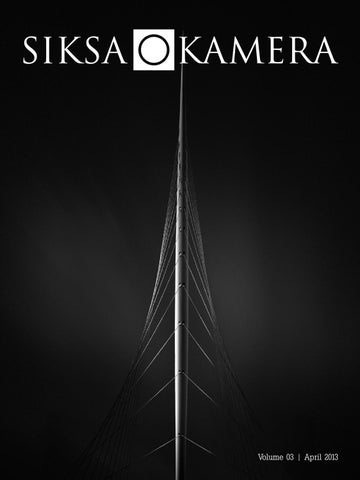 see the different, we proud of it FEBRUARI 2013 | SIKSA KAMERA |

Joel Tjintjelaar is an International Award winning B&amp;W fine-art photographer from the Netherlands. His work has been published on many online websites and in magazines like American Photo (USA), Outdoor Photographer Magazine (USA) and Dutch magazine Digifotopro to name a few. Besides these publications his work has also been used for commercial purposes like the worldwide press release for BMWâ&amp;#x20AC;&amp;#x2122;s 6 series concept coupe (September 2010) and the NIK Softwareâ&amp;#x20AC;&amp;#x2122;s Promotional video for the worldwide release of Silver Efex Pro 2, which features him as the main character. Joel is also member of Team NIK Worldwide, a select group of some of the best photographers in the world that work closely with NIK Software and deliver practical education for the photographic arts community. Born in Jakarta, but raised in the Netherlands, Joel has studied criminal law, but has always cultivated his artistically oriented passions, especially for architecture, cinematography and photography. http://www.glass-star-agency.com http://www.bwvision.com https://www.facebook.com/BWVision https://www.facebook.com/Glass.Star http://www.facebook.com/joel.tjintjelaar

Hello, can you tell a little bit about the background of your photography career? I’ve started photography when I was just a little boy, aged around 6 or 7, when I loved to take the camera of my father and just shoot some snap shots. I continued to be interested in photography but diverted to other art-forms as well like drawing, painting, writing and music. The love for photography however has always been there so with the advent of digital cameras 13 years ago my interest for photography became stronger again. But it wasn’t until 2009 before my work finally got published for the first time in American Photography Magazine. Many other (online) magazines followed including interesting and lucrative projects in the German automotive industry and also being the main character in NIK Software’s Silver Efex Pro2 world wide promotional campaign. At the same time I won the International Photography Awards three times in a row: 2nd place in 2010 and finalist for the Sony World Photography Awards, 1st place in 2011 and again 2nd place in 2012. What do you do outside of photography? Whether it helped influence on your work? I still work as a project manager in the IT industry and I love to read and write. Another passion of mine is cinematography that is closely related to photography of course. My secret dream is to one day be the director of photography in a great movie! Do you remember your first photography? No I don’t remember that exactly, because it was a photo shot with an analog camera when I wasn’t even a teenager. The first photograph I really remembered was when I was around 13 and took a few shots of a part of the Dutch coast and also photographed my father’s car. As a person who ever born in Indonesia, what do you think about photography in Indonesia? Yes I was born in Jakarta and from my mother’s side I’m a direct descendant of the Susuhunan of Solo. I still have family in Indonesia and I want to visit Indonesia one day soon. I think photography in Indonesia is at a very high level. I’ve seen so many great photographs of Indonesian artists like Hengki Koentjoro (but there are many others) and I’m really very impressed with that. I’m sure we will see many other Indonesian artists in the very near future.

Much of your work is in the long exposure cityscape, would you share a little bit of tips for making the best cityscape work as you create? You have to love architecture! You have to be passionate about this other and classic art form that is called architecture. If you’re not passionate about architectural lines and design, then you’d better start looking for another subject. Passion is the driving force of any art form. And if you love architecture then here are a few tips: 1. Clouds and blue skies. Very often the ratio should be 65% blue skies and 35% clouds. This gives me the best possible results. This also means that there will be lots of sunlight and 10 stops won’t be enough most of the times. You will need 16 stops most of the time to block the light effectively when shooting straight up to the sky. 2. You often want to shoot with apertures wider than f/8. No need for small apertures for architecture. 3. You also want smooth streaks of clouds that don’t look too thick and hard but look smooth and ethereal and yet very recognizable as sharp streaks of uninterrupted clouds. Architectural photos with LE streaks of clouds that are interrupted due to shorter exposure times look messy and not aesthetical in my view. You need longer exposure times to achieve the best effects in the sky with the smooth, long and uninterrupted ethereal looking streaks of clouds: &gt; 5 min. I prefer 6 minutes minimal. My ideal setting for LE architecture is approx. f/5.6, 16 stops, ISO 100 and 6 or 7 minutes exposure time. On the site that you created (BW Vision), so you share the techniques and process of making the work of your long exposure, while others tried to cover up the technique. not whether you worry about it?

No, I never worry that people will create great B&amp;W long exposure photographs. I hope they will! I’m not worried at all about sharing my latest techniques on architectural photography either. For example, I’ve developed my own methods for processing my B&amp;W photographs that I call iSGM. I even published video tutorials for that and teach workshops around the world where I share everything I know. When people use my methods and create great photographs and start winning awards then I can at least say I inspired and influenced those people, that’s far more rewarding than trying to cover up my methods and keep it secret. It’s a sign of weakness. I like to share my knowledge because I know that art isn’t only a matter of technical knowledge. First and foremost it’s a matter of knowing what and how you want to express your inner world. That what makes you unique as a person. I can’t teach that, because it’s something only you know. Which artist/photographer inspired your art? Yousuf Karsh and Irving Penn, both are B&amp;W portrait photographers, Ralph Gibson, B&amp;W fine art photographer, Jean Loup Sieff, B&amp;W fine art photographer. So you see that although I usually photograph seascapes and architecture, my love goes to the classic B&amp;W portrait and fine art photographers. How would you describe your work in three words? Aesthetic, minimalistic and passionate.

Our jury make a selection for the best by the month. Join to our community 32 | SIKSA KAMERA | APRIL 2013

This photo was taken just before sunset. I saw this piece of ice and I knew that It’s a great subject of clean minimalistic composition. It wasn’t easy because waves were breaking just in front of the ice cube moving it all the time. Finally when I succeeded, dark and heavy clouds came from the west side covered beach with snow again. Camera Lens Exposure Filters

Seine Side Bank and Bridge

THE BEAUTY OF LONG EXPOSURE - MYTHOLOGY

Jay, Are You Oke? by Morow Blind http://www.facebook.com/morow.blind 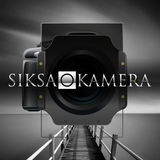