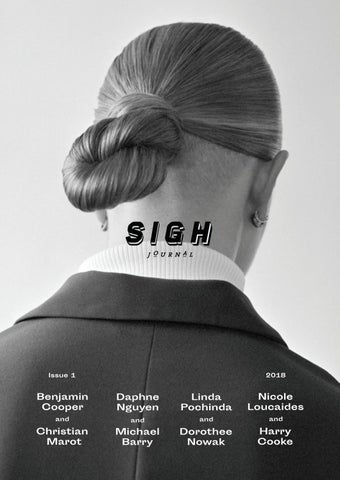 SIGH Journal is an independent publication with an undying love for the medium of photography. We aim to provide a space on the ever-expanding internet for visual artists, photographers, and creatives to showcase their work, in a new and innovative way. We hope we have kept to our ideology, and this is our first glimpse of what the paper SIGH Journal will be like. Throughout this online edition we have aimed to capture the blend between photography genres, and we’ve managed to travel around the world through the imagery in doing so. It’s been a steady and gradual process in getting to this point, and we’d like to thank everyone that has submitted to us over the last 4 months, those who have been following the journey and to the team that has helped make this happen. We as SIGH Journal want to expand over the course of this year, so please keep an eye out for the plans that we have in store. Enjoy this beautifully curated online edition, spread the word and we look forward to hearing what you think. In future issues, we’ll be opening up a select number of pages for advertising, whether you’re a photography show, clothing brand, business etc. we’d love to hear from you, email us at – advertising@sighjournal.com where one of our team will get back to you with an Advertising Package.

Wash Away Your Sins

Wash Away Your Sins explores the lasting effects of India’s historic and turbulent relationship with colonialism, Cooper’s series documents the city of Lucknow, in northern India, and how the remnants of familiar elements of British culture and architecture have become rooted and assimilated into everyday Indian life — despite being surrounded by the region’s alien and unforgiving landscape.

Madagascar’s first settlers came from southeast Asia 2000 years ago. They were soon joined by migrants from neighbouring Africa and the Arabian peninsula. This melting pot of Indian Ocean populations evolved into distinct kingdoms, only becoming unified in the 18th Century after much resistance. This new-found unity could only last so long and in 1869 the French invaded taking the island as their own, a title they retained for over 60 years. This was sufficient time to influence day to day life. Since then, the islanders have been bumped from one violent leader to another violent leader. Currently, Madagascar remains one of the poorest countries in Africa. What interested me about the Malagasy people are the vast differences in their appearance, dialect and culture. Half of the population maintain their indigenous religious beliefs, while others follow Christianity and a minority, Islam. The idea of a mini continent becomes very prominent when traveling around the island. The first chapter of this book is made up of a series of images I took over the period of an hour in the capital, Antananarivo. My approach there was different to that adopted later. Admittedly, it was not always the most respectful, but in a way that I was able to capture intimate moments as I walked through the busy markets and streets. Looking beyond the poverty, there was a real vibrancy and atmosphere that I set out to capture.

My journey then took me to the northern most tip of the country. I stayed for 6 weeks on the very small volcanic island, Nosy Komba. The isolation there means that many of the locals have never set foot from the island. There is no electricity supply and fresh water is supplied from a small river at the tip. It’s a very simple ‘Mora Mora’ (taking life slow) way of life. The lives of the local communities revolve around the land, making herbal remedies from some of the 70 medicinal tropical flora. Crafting pirogues from trees, techniques passed down from generations, each family creates their own unique variation. The duration of my stay there meant that I was able to really get to know the people and surroundings, their initial feeling of hostility towards the camera quickly passed as I gained their trust. Back on the mainland I travelled 800km by road from the tropical eastern rainforest to the dry deciduous forest in the west, noticing yet more diversity in traditions, culture, beliefs and ethnicity. Passing many nomadic tribes and observing very different methods of home construction that rely on timber as the most abundant natural material from their location, I was constantly reminded of the integral part that nature plays in the lives of the Malagasy people. Driving across the barren landscape it was hard to visualise a time where dense primary forest once stood. This unsustainable practice of slash &amp; burn and deforestation may now be moving beyond the point of redemption.

Hold me through the Night

Tell Me Her Story

“Tell me her story because War is only the half of it’ is a documentary project based on my family’s Immigration history from Poland to France in 1938. The project focuses on the journey my grandmother Teresa began with her family when she was 11. Born in 1927, she was raised in Ostrów Wielkopolski which was, before the end of World War II, in the territories of the Republic of Germany. Her family left on the eve of the Second World War and arrived first in Belgium before establishing themselves in France.

No one in my family talked about the past. Teresa’s story is not as obvious as it seems and I believe there is more. Yet, the research done in Poland has not been successful and the story of Teresa still remains hidden. ‘Tell me her story because War is only the half of it’ is about my quest to know more about her.”

In our first online edition we aim to give a taste of what's to come this year from SIGH JOURNAL. Blending two genres; documentary and fashion in this edition you'll be taken all around the world. The plan is to produce three more EJOURNAL's this year, and then at least one print issue. So please do keep your eyes peeled on our website and social media platforms. We hope you enjoy this little taste of what's to come, and please do let us know what you think. The SIGH Journal Team P.S. If interested in advertising in future issues please email info@sighjournal.com - not advertising@sighjournal.com 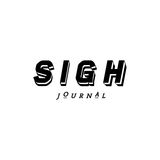