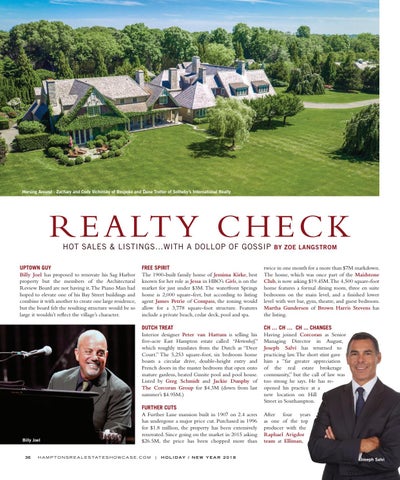 UPTOWN GUY Billy Joel has proposed to renovate his Sag Harbor property but the members of the Architectural Review Board are not having it. The Piano Man had hoped to elevate one of his Bay Street buildings and combine it with another to create one large residence, but the board felt the resulting structure would be so large it wouldn’t reflect the village’s character.

FREE SPIRIT The 1900-built family home of Jemima Kirke, best known for her role as Jessa in HBO’s Girls, is on the market for just under $3M. The waterfront Springs home is 2,000 square-feet, but according to listing agent James Petrie of Compass, the zoning would allow for a 3,778 square-foot structure. Features include a private beach, cedar deck, pool and spa.

twice in one month for a more than $7M markdown. The home, which was once part of the Maidstone Club, is now asking $19.45M. The 4,500 square-foot home features a formal dining room, three en suite bedrooms on the main level, and a finished lower level with wet bar, gym, theatre, and guest bedroom. Martha Gundersen of Brown Harris Stevens has the listing.

CH … CH … CH ... CHANGES Having joined Corcoran as Senior Managing Director in August, Joseph Salvi has returned to practicing law. The short stint gave him a “far greater appreciation of the real estate brokerage community,” but the call of law was too strong he says. He has reopened his practice at a new location on Hill Street in Southampton.

FURTHER CUTS A Further Lane mansion built in 1907 on 2.4 acres has undergone a major price cut. Purchased in 1996 for $1.8 million, the property has been extensively renovated. Since going on the market in 2015 asking $26.5M, the price has been chopped more than

After four years as one of the top producer with the Raphael Avigdor team at Elliman, Joseph Salvi 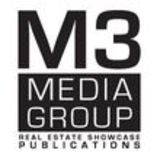 Welcome to the Holiday/New Year issue of Hamptons Real Estate Showcase. As we prepare to celebrate the upcoming holiday season, let’s all be...

Welcome to the Holiday/New Year issue of Hamptons Real Estate Showcase. As we prepare to celebrate the upcoming holiday season, let’s all be...