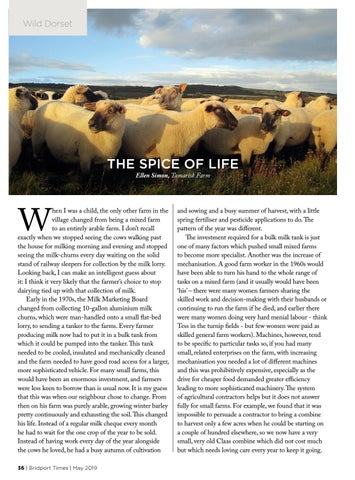 hen I was a child, the only other farm in the village changed from being a mixed farm to an entirely arable farm. I don’t recall exactly when we stopped seeing the cows walking past the house for milking morning and evening and stopped seeing the milk-churns every day waiting on the solid stand of railway sleepers for collection by the milk lorry. Looking back, I can make an intelligent guess about it: I think it very likely that the farmer’s choice to stop dairying tied up with that collection of milk. Early in the 1970s, the Milk Marketing Board changed from collecting 10-gallon aluminium milk churns, which were man-handled onto a small flat-bed lorry, to sending a tanker to the farms. Every farmer producing milk now had to put it in a bulk tank from which it could be pumped into the tanker. This tank needed to be cooled, insulated and mechanically cleaned and the farm needed to have good road access for a larger, more sophisticated vehicle. For many small farms, this would have been an enormous investment, and farmers were less keen to borrow than is usual now. It is my guess that this was when our neighbour chose to change. From then on his farm was purely arable, growing winter barley pretty continuously and exhausting the soil. This changed his life. Instead of a regular milk cheque every month he had to wait for the one crop of the year to be sold. Instead of having work every day of the year alongside the cows he loved, he had a busy autumn of cultivation 36 | Bridport Times | May 2019

and sowing and a busy summer of harvest, with a little spring fertiliser and pesticide applications to do. The pattern of the year was different. The investment required for a bulk milk tank is just one of many factors which pushed small mixed farms to become more specialist. Another was the increase of mechanisation. A good farm worker in the 1960s would have been able to turn his hand to the whole range of tasks on a mixed farm (and it usually would have been ‘his’ – there were many women farmers sharing the skilled work and decision-making with their husbands or continuing to run the farm if he died, and earlier there were many women doing very hard menial labour - think Tess in the turnip fields - but few women were paid as skilled general farm workers). Machines, however, tend to be specific to particular tasks so, if you had many small, related enterprises on the farm, with increasing mechanisation you needed a lot of different machines and this was prohibitively expensive, especially as the drive for cheaper food demanded greater efficiency leading to more sophisticated machinery. The system of agricultural contractors helps but it does not answer fully for small farms. For example, we found that it was impossible to persuade a contractor to bring a combine to harvest only a few acres when he could be starting on a couple of hundred elsewhere, so we now have a very small, very old Claas combine which did not cost much but which needs loving care every year to keep it going.