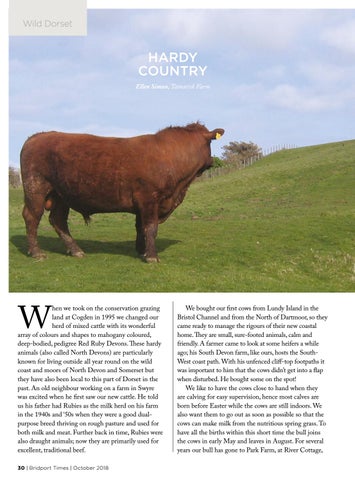 hen we took on the conservation grazing land at Cogden in 1995 we changed our herd of mixed cattle with its wonderful array of colours and shapes to mahogany coloured, deep-bodied, pedigree Red Ruby Devons. These hardy animals (also called North Devons) are particularly known for living outside all year round on the wild coast and moors of North Devon and Somerset but they have also been local to this part of Dorset in the past. An old neighbour working on a farm in Swyre was excited when he first saw our new cattle. He told us his father had Rubies as the milk herd on his farm in the 1940s and â&#x20AC;&#x2DC;50s when they were a good dualpurpose breed thriving on rough pasture and used for both milk and meat. Further back in time, Rubies were also draught animals; now they are primarily used for excellent, traditional beef. 30 | Bridport Times | October 2018

We bought our first cows from Lundy Island in the Bristol Channel and from the North of Dartmoor, so they came ready to manage the rigours of their new coastal home. They are small, sure-footed animals, calm and friendly. A farmer came to look at some heifers a while ago; his South Devon farm, like ours, hosts the SouthWest coast path. With his unfenced cliff-top footpaths it was important to him that the cows didnâ&#x20AC;&#x2122;t get into a flap when disturbed. He bought some on the spot! We like to have the cows close to hand when they are calving for easy supervision, hence most calves are born before Easter while the cows are still indoors. We also want them to go out as soon as possible so that the cows can make milk from the nutritious spring grass. To have all the births within this short time the bull joins the cows in early May and leaves in August. For several years our bull has gone to Park Farm, at River Cottage,