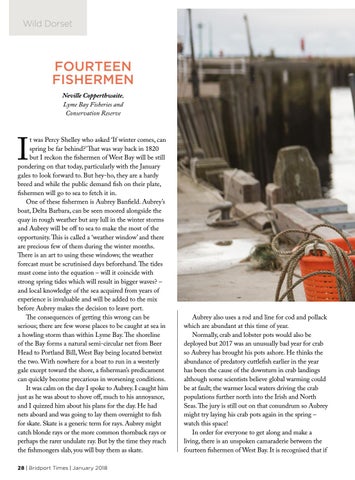 t was Percy Shelley who asked ‘If winter comes, can spring be far behind?’ That was way back in 1820 but I reckon the fishermen of West Bay will be still pondering on that today, particularly with the January gales to look forward to. But hey-ho, they are a hardy breed and while the public demand fish on their plate, fishermen will go to sea to fetch it in. One of these fishermen is Aubrey Banfield. Aubrey’s boat, Delta Barbara, can be seen moored alongside the quay in rough weather but any lull in the winter storms and Aubrey will be off to sea to make the most of the opportunity. This is called a ‘weather window’ and there are precious few of them during the winter months. There is an art to using these windows; the weather forecast must be scrutinised days beforehand. The tides must come into the equation – will it coincide with strong spring tides which will result in bigger waves? – and local knowledge of the sea acquired from years of experience is invaluable and will be added to the mix before Aubrey makes the decision to leave port. The consequences of getting this wrong can be serious; there are few worse places to be caught at sea in a howling storm than within Lyme Bay. The shoreline of the Bay forms a natural semi-circular net from Beer Head to Portland Bill, West Bay being located betwixt the two. With nowhere for a boat to run in a westerly gale except toward the shore, a fisherman’s predicament can quickly become precarious in worsening conditions. It was calm on the day I spoke to Aubrey. I caught him just as he was about to shove off, much to his annoyance, and I quizzed him about his plans for the day. He had nets aboard and was going to lay them overnight to fish for skate. Skate is a generic term for rays. Aubrey might catch blonde rays or the more common thornback rays or perhaps the rarer undulate ray. But by the time they reach the fishmongers slab, you will buy them as skate. 28 | Bridport Times | January 2018

Aubrey also uses a rod and line for cod and pollack which are abundant at this time of year. Normally, crab and lobster pots would also be deployed but 2017 was an unusually bad year for crab so Aubrey has brought his pots ashore. He thinks the abundance of predatory cuttlefish earlier in the year has been the cause of the downturn in crab landings although some scientists believe global warming could be at fault; the warmer local waters driving the crab populations further north into the Irish and North Seas. The jury is still out on that conundrum so Aubrey might try laying his crab pots again in the spring – watch this space! In order for everyone to get along and make a living, there is an unspoken camaraderie between the fourteen fishermen of West Bay. It is recognised that if 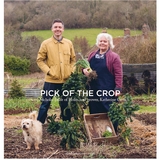