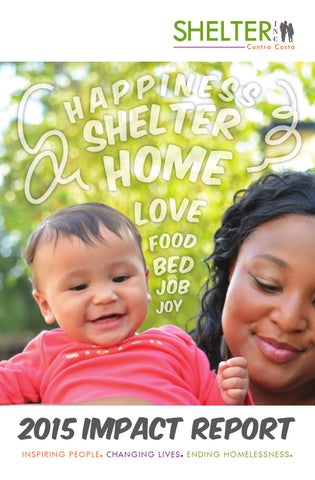 A MESSAGE FROM JOE CANNIZZO As Board president, I have the privilege and pleasure of sharing many of the successes of SHELTER, Inc. with the community. When I recount the story of the young pregnant mother who was able to move out of her car and into our family shelter or the father who was able to keep his apartment while he was recovering from cancer, I am filled with gratitude knowing that I am part of a community that cares. I know that it wouldn’t be possible to help the thousands of men, women and children who struggle with homelessness in our community every year without you. Thank you for generously giving your resources, time and talents to partner with SHELTER, Inc. and care for those who need help. This past year, we’ve seen the economy in the bay area continue to improve and more jobs come to our region. The change has been a welcome relief after years of recovering from the recession. However, we’ve also seen an influx in the population, putting stress on the current housing supply and raising the cost of housing in Contra Costa County. Our challenge, as always, has been to help low-income residents keep and find affordable housing. This year, thanks to your support, we were able to financially assist more individuals and families than ever. Looking forward, in 2016 SHELTER, Inc. will celebrate its 30th anniversary, having helped an estimated 200,000 men, women and children struggling to overcome homelessness. Our founders had a vision, a depth of passion and relentless dedication as they worked tirelessly to bring services to those living on the streets as well as awareness to Contra Costa residents. Almost 30 years later, their vision is a reality and I am thankful to those founders for building the strong foundation that has allowed SHELTER, Inc. to serve the community for so many years, and into the future. Thank you for your continued commitment to ending homelessness, one family at a time.

PREVENTING HOMELESSNESS “I am a proud parent who tries to keep a job and do right by my family. I contacted your program for help with paying my rent. During this time, I was going through some hardship and really needed someone to help me. I was beginning to give up hope until I came into contact with you. I am so grateful to this program. It helped me from getting evicted and kept my family and I off the streets. Thank you!” - Marsha Preventing families from becoming homeless costs significantly less then helping them once they’ve already become homeless. Using a combination of financial support, case management and individualized strategies, our Homeless Prevention Program helps families and individuals keep their housing or obtain housing, achieve greater stability and progress towards self-sufficiency. A majority of families and individuals are provided one-time rental assistance to prevent homelessness. Some need a little more help, and work one-onone with a case manager to manage their budgets and set goals to move toward self-sufficiency. SERVED:

In the past year, we implemented our One Door System, a new phone hotline staffed 9am-4pm Monday through Friday to allow people in crisis to more easily contact us. We also doubled the number of trained intake assistants who answer requests for assistance. While we are not able to financially assist all individuals, the addition of the One Door number has allowed us to more quickly serve those who qualify for our programs and refer individuals we cannot help to additional resources for assistance. This year, we received calls from over 3,374 households seeking assistance.

96% STAYED IN THEIR HOMES

ENDING THE CYCLE OF HOMELESSNESS “I don’t know where I would be today without you. You helped me with rental assistance, my resume and job search - today I have my own home, my daughter lives with me and I’ve obtained and held a job for over one year due to your help. Thanks to you and SHELTER, Inc., I am a productive member of society.” - Karen When homeless families and individuals come to SHELTER, Inc., they receive safe, temporary homes where they have access to employment specialists and case managers who help them on their path to self-sufficiency. We offer time-limited housing combined with job training, education, counseling and household budgeting to help homeless families and individuals overcome the challenges and barriers which led to homelessness. This year, the addition of our HousingWORKS! program has allowed us to serve more homeless families than ever. The program allows homeless families enrolled SERVED:

in CalWORKs (California Work Opportunity and Responsibility to Kids) formally known as welfare, to obtain permanent housing with a lease in their own name. Our case managers and housing specialists ensure CalWORKs families obtain affordable housing while Contra Costa Employment and Human Services assists with job training and retention. Families enrolled in CalWORKs tend to be among the neediest, often relying on government assistance for food, child care and employment assistance. In the 6 months that the program was implemented during our last fiscal year, we served 448 individuals through HousingWORKS!

PROVIDING AFFORDABLE HOUSING “I lost my place because of mental illness, and I was homeless. It was very hard for me to get housing with a mental illness and on a fixed income. Since I’ve been in the program, I’ve accomplished a lot. I got a certificate from City College of San Francisco, I graduated from a behavior health program and I am a peer mentor to other people struggling with mental illness. Thank you for all of your support and giving me the opportunity to have permanent housing.” - Nisa

We know that for disabled lowincome families and individuals, finding permanent affordable housing can be a challenge. Our affordable housing provides safe and sanitary housing while promoting housing stability for those who need it most. We own and master lease over 200 units throughout the county, providing a safe place to live at an affordable price to low-income, vulnerable residents who otherwise have been unable to find housing.

+ SHELTER, INC. BOARD OF DIRECTORS

In Memory of Jim Hackett Board Member

“One of the issues that LOPC cares about most is homeless assistance. Our members have been deeply involved at SHELTER, Inc. and are passionate about the mission and vision of SHELTER, Inc. to end the cycle of homelessness.”

“One of the very best things about 2015 for us has been having an opportunity to work with SHELTER, Inc. From the moment we learned about your mission and the great work you do for those in need, we have looked for opportunities to be involved. Whether it was wrapping holiday gifts, doing teambuilding on moving day, painting at Mountain View or working with the great kids at Lyle Morris, it has been our honor and our pleasure to be a part of the SHELTER, Inc. family and to help others feel they have a home.”

“I don’t think anyone chooses to be homeless or hungry. I began volunteering because I wanted to do something to help them. Plus, it’s been a lot of fun.”

WE BELIEVE THAT EVERY CHILD SHOULD HAVE A HOME. But we know that far too many families are homeless and without hope. They struggle to keep a roof over their children’s heads. The high cost of rental housing and the lack of fundamental skills, such as literacy and job skills, put even more families at risk. SHELTER, Inc. gives families a safe place to live, meeting their most basic needs, while offering individualized services such as education, employment development and counseling. With the help of the community, we provide families life-long tools that allow them to transform their lives and the future for their children.