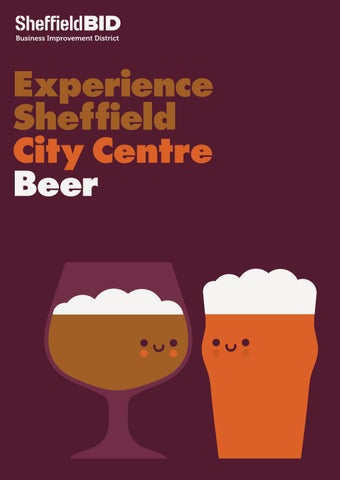 Sheffield’s reputation for beer has grown to almost the same heights as its reputation for steel. The city is home to over 20 breweries, and a 2016 report found 400 beers on sale in its many characterful pubs on any typical day. Naturally, then, the city centre is a great destination for enthusiasts of real ale and craft beer.

High quality cask ales aren’t hard to come by in Sheffield. From a whole world of ales on the pumps at the railway station’s Sheffield Tap to local heroes on the bar at Rutland Arms to the nationally trusted selection at Wetherspoon’s pubs, this trail will have you raising a glass to the delights of cask in no time. Sheffield Tap Rutland Arms The Head of Steam The Bankers Draft Museum The Bessemer The Benjamin Huntsman Yates The Sheffield Waterworks Company Frog and Parrot The Red Deer

It goes without saying that live sport is more fun when you’re part of a crowd. Next time you’re looking to enjoy a big match in Sheffield, head down to one of these sports-fanatic pubs or bars – including student hangouts like the Graduate and the Cav, and a few places where you can shoot pool with pals, including the huge Common Room. Roebuck Tavern The Graduate The Penny Black Walkabout The Cavendish The Beehive Common Room

Join the craft beer revolution. Taps, bottles and cans now bring all manner of imaginative flavours to thirsty beer fans. Follow this route to sample something out of the ordinary, starting at Triple Point, which brews and serves its own beers on site, and heading through the independent Devonshire Quarter. Triple Point Brewing All Bar One Bungalows and Bears The Devonshire Brew Dog The Forum

Some Sheffield institutions have been priding themselves on pulling a good, no-nonsense pint for decades, if not centuries. This route through the city centre will take you to a handful of the more traditional boozers, starting at a Sam Smith’s, taking in a couple of Irish boozers on Trippet Lane, and ending in the cosy Bath Hotel. Brown Bear The Three Tuns Dog and Partridge The Grapes Fagan's The Bath Hotel

Don’t miss Sheffield Beer Week each March, when breweries from all over the country descend on the city and join its pubs and brewers for one big knees up.

You don’t need to worry about the last orders bell ringing at 11 o’clock in Sheffield. See below for some of the places where you can enjoy a pint after midnight every day of the week in the city centre — some of them open even longer into the early hours at the weekend. The Washington The Devonshire Cat The Original Bierkeller The Wick at Both Ends Bar and Beyond

This guide will help you discover the beer world’s best kept secret, taking you to some of Sheffield city centre’s pub and bar highlights. There’s a trail to suit everyone from cask ale enthusiasts and craft beer revolutionaries to night owls, sports fanatics, and those who favour a bit of tradition. Cheers!