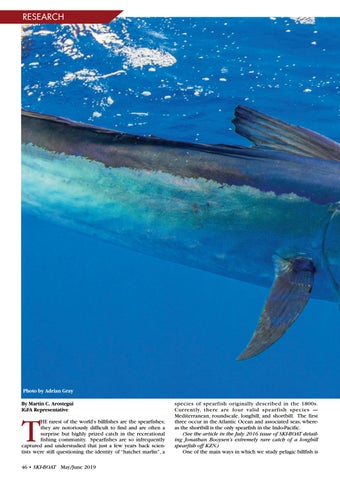 Photo by Adrian Gray By Martin C. Arostegui IGFA Representative HE rarest of the world’s billfishes are the spearfishes; they are notoriously difficult to find and are often a surprise but highly prized catch in the recreational fishing community. Spearfishes are so infrequently captured and understudied that just a few years back scientists were still questioning the identity of “hatchet marlin”, a

species of spearfish originally described in the 1800s. Currently, there are four valid spearfish species — Mediterranean, roundscale, longbill, and shortbill. The first three occur in the Atlantic Ocean and associated seas, whereas the shortbill is the only spearfish in the Indo-Pacific. (See the article in the July 2016 issue of SKI-BOAT detailing Jonathan Booysen’s extremely rare catch of a longbill spearfish off KZN.) One of the main ways in which we study pelagic billfish is

For over 35 years Ski-Boat magazine has been South Africa's number one deep sea fishing magazine. The May 2019 issue includes stories on the 2019 FIPS-M Trolling Championship, the art of anchoring, handlining for yellowtail off Arniston, research into shortbill spearfish behaviour, rebuilding a boat, fishing the Andsman Islands , the first fishing tourists back in Mozambique and recipes for cooking geelbek. Read and enjoy!