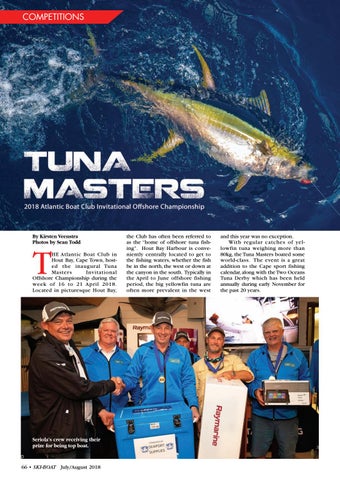 Seriola’s crew receiving their prize for being top boat.

the Club has often been referred to as the “home of offshore tuna fishing”. Hout Bay Harbour is conveniently centrally located to get to the fishing waters, whether the fish be in the north, the west or down at the canyon in the south. Typically in the April to June offshore fishing period, the big yellowfin tuna are often more prevalent in the west

and this year was no exception. With regular catches of yellowfin tuna weighing more than 80kg, the Tuna Masters boated some world-class. The event is a great addition to the Cape sport fishing calendar, along with the Two Oceans Tuna Derby which has been held annually during early November for the past 20 years.